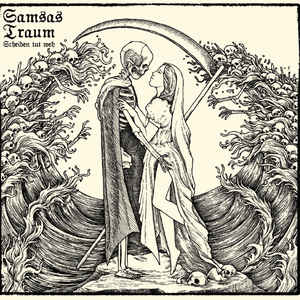 Background/Info: Set up and driven since the late 90s by Alexander Kaschte (still involved with Weena Morloch), Samsas Traum became a recognized and praised German formation at the wider fields of metal music. “Scheiden Tut Weh” is not exactly a ‘new’ album although revealing songs that have been released for the very first time. The songs indeed were composed around 2007, which is the period of the “Heiliges Herz”-album.

Content: Alexander Kaschte remains the main instigator of this band, but he got the help of faithful musicians on drums, bass and guitar. “Scheiden Tut Weh” sounds hard and definitely metal-minded. Some songs have been accomplished by mystic atmospheres; others have been accentuated by a fusion of metal and gothic music while I also noticed one track with some punk-metal approach (cf. “Ich Bin Der Antichrist”).

+ + + : This is a hard, but diversified opus. I especially like the mystic touch hanging over “Die Taufe” and the title track. Other cuts I enjoyed             are the ones supported with a dark and more ‘classical’ gothic sphere. I also have to mention “Das Madenlied” for its refined arrangements. Last, but not least -and that’s a rather familiar item for nearly all Trisol releases, I want to say a word about the great artistic digipak.

– – – : This is the kind of album –and band, which I think will more appeal for metal heads instead of the usual gothic audience. I’m not that fond of the heaviest metal passages.

Conclusion: Samsas Traum is ‘great’ in Germany and that’s mainly because of their sound, but also of the German lyrics. It remains really mysterious why this band remains rather unknown outside their country.