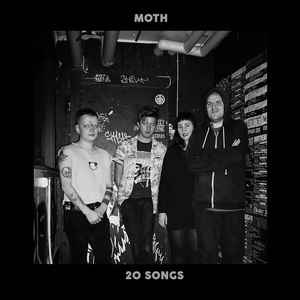 Background/Info: Moth was a Danish formation active in between 2012 and 2016. They released several productions and joined hands together with Mass Media Records. This album is a kind of retrospective featuring a selection of tracks that originally appeared on 7” and 12” plus a few unreleased songs.

Content: Moth sounds in the truest spirit of the 80s mixing influences such as cold-wave and post-punk. Everything sounds ‘retro’-like and even the few electronic arrangements are vintage-minded.

+ + + : I like this 80s emulation, which sometimes reminds me of The Cure for the guitar play. The guitar is an essential element of the production, but I also have to mention, the typical deep, bass parts and drums. There also is one great cut featuring female vocals. This song reminds me a bit to Siouxsie & The Banshees and reveals another side of this band. The song “Frozen Tears” is a great piece of ‘cold’ wave music.

– – – : I globally like this production although a few ‘softer’ and more evasive cuts are less convincing.

Conclusion: “20 Songs” is the perfect way to (re)discover Moth, which clearly was a talented formation emulating the darkest hours of the 80s.

Since you’re here … … we have a small favour to ask. More people are reading Side-Line Magazine than ever but advertising revenues across the media are falling fast. And unlike many news organisations, we haven’t put up a paywall – we want to keep our journalism as open as we can. So you can see why we need to ask for your help. Side-Line’s independent journalism takes a lot of time, money and hard work to produce. But we do it because we want to push the artists we like and who are equally fighting to survive. If everyone who reads our reporting, who likes it, helps fund it, our future would be much more secure. For as little as 5 US$, you can support Side-Line Magazine – and it only takes a minute. Thank you. The donations are safely powered by Paypal.
Tags: Moth, post-punk