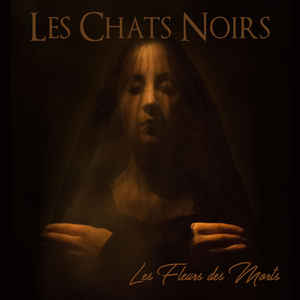 Background/Info: Les Chats Noirs is a male-female duo from Brazil. They previously self-released a few EP’s and are now ready to expand their music to a wider audience via Wave Records.

Content: The main characteristic of Les Chats Noirs (translated ‘The Black Cats’) is the mix of an evasive cold-wave music style together with piano. It’s not that ‘special’ although it creates a personal sound texture. It feels like injecting some melancholia and other spooky passages in the work. The piano also takes care for the melody lines, which remain carried by sorrow. Both members are taking care of the vocals, which often resulted in duos.

+ + + : Les Chats Noirs mixes ghost-like atmospheres together with this typical gothic-like melancholia. The songs have some visual appeal, inviting the listener to imagine a desperate vision of loneliness. The piano is a real important aspect of the work and mainly responsible for the emotive sensation.

Conclusion: Delicate, dark, desperate and melancholic probably are some of the most appropriated adjectives to describe this debut album. It finally resulted in a sweet music journey created by a band, which I’m sure will reveal more potential on their further work.