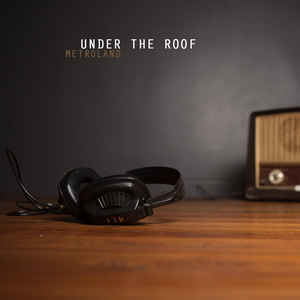 Background/Info: “Under The Roof” is not just an EP taken from the newest Metroland album “Things Will Never Sound The Same Again”. It also and probably is the most symbolic title referring to their close friend Passenger L (Louis Zachert) who passed away one year ago. “Under The Roof” was Louis’ studio where all Metroland stuff was produced.

Content: The title song already was one of the album’s highlights. There clearly is this typical Metroland touch getting back to 80s electro-pop standards like The Human League and of course Kraftwerk.

Next to the “Radio”-edit there also is a “Headphone”-edit, both versions feature good-old EBM-driven bass lines.

The B-side track is a shorter mix (cf. “Werk”-mix) of “Good Moaning”. The original version also appeared on the album and again evokes the loss of Passenger L.

+ + + : “Under The Roof” probably is one of the most appropriated titles of the last Metroland-album to get released as the EP-title track. I like the “Headphone”-version.

– – – : Great music, but not exactly adding a real bonus if you’ve already bought the album.

Conclusion: The newest work of Metroland clearly sounds as the most experimental one to date although most of the tracks remain pretty danceable. The retro-influences remain the most essential aspect of this band.

Best songs: “Under The Roof – Headphone”.

Since you’re here … … we have a small favour to ask. More people are reading Side-Line Magazine than ever but advertising revenues across the media are falling fast. And unlike many news organisations, we haven’t put up a paywall – we want to keep our journalism as open as we can. So you can see why we need to ask for your help. Side-Line’s independent journalism takes a lot of time, money and hard work to produce. But we do it because we want to push the artists we like and who are equally fighting to survive. If everyone who reads our reporting, who likes it, helps fund it, our future would be much more secure. For as little as 5 US$, you can support Side-Line Magazine – and it only takes a minute. Thank you. The donations are safely powered by Paypal.
Tags: Metroland