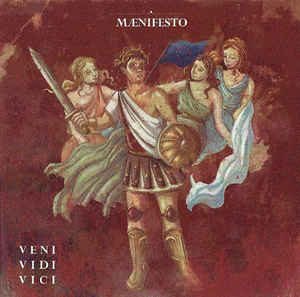 Background/Info: Mænifesto is an Italian solo-project operating from Rome and conducted by Augustus Gregorio-Rossi. I never heard of this band before, which has been introduced as an avant-garde techno project.

Content: I didn’t notice any single techno music influence! Mænifesto rather sounds as an experimental outfit based upon electronics and some bombastic arrangements. Some songs move on the edge of rock while others are more into ballad style and played with guitar.

+ + + : The least I can say is that Mænifesto has developed its own style and that’s a rather positive aspect. There also is a real variety of influences running through this opus. I personally prefer the more electro-driven cuts and especially “Der Tanz Der Jungfrau Drusilla” for the vintage electronics. Another major aspect of the work consists of the rather passionate vocal lines.

– – – : It’s not an easy thing for a band to catch a wider attention when the sound is not really defined. I have the impression Mænifesto is still in search of a real sound-identity, which probably explains why there are so many influences running through the work. The intermezzos are not exactly adding a bonus to the work and just accentuate the anarchistic impression this album has been made of. It creates a fragmented feeling.

Conclusion: “Veni Vidi Vici” is an ambitious title for an album, which is hard to grasp and nearly impossible to define. This band mainly has to find its own sound.