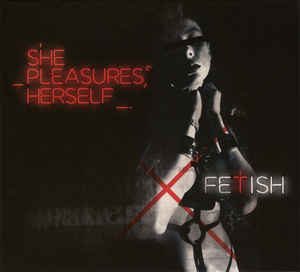 Background/Info: Hailing from Lisbon (Portugal) She Pleasures Herself is a trio featuring members who already gained experience in other formations. The band was set up in 2016 and now unleashes their debut album on Manic Depression Records. The work features several songs the band previously released on digital format.

Content: She Pleasures Herself is devoted to the good-old new-wave music and bands like Joy Division (for the music) and The Sisters Of Mercy (for the vocals) will immediately come to mind. “Fetish” has this typical dark and depressed spirit of the 80s and is pure nostalgia.

The songs are carried by solid guitar playing and accomplished by electronic treatments. The deep bass is another typical characteristic from the 80s. One of the most surprising cuts from the album is the cover version of Red Zebra’s “I Can’t Live In A Livingroom”.

+ + + : She Pleasures Herself sounds like an 80s band. They emulate the true spirit of new-wave and cold-wave music and often reminding me of the guitar parts of Joy Division. The melancholic atmospheres hanging over the work accentuates the obscure side of the sound. “Fetish” features several noticeable songs and is a fully accomplished piece of work.

– – – : She Pleasures Herself for sure sounds like a new emulation of the 80s new-wave. They don’t bring anything new and can’t compete with the real 80s formations. The cover version of Red Zebra sounds cool, but I definitely prefer the magic of the original version. I’m missing some passion in the production of the vocals on a few songs.

Conclusion: She Pleasures Herself sounds like a ghost from the 80s new-wave scene that has been awakened. I think this band has to improve a few elements, but globally speaking I really like this album, which is a promising debut work.

Tags: She Pleasures Herself