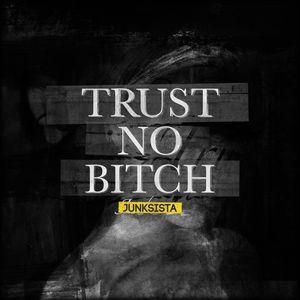 Background/Info: Junksista can be considered as one of the hottest Alfa Matrix singings in the past few years. After having released 2 full lengths and an impressive number of (mainly digital) EP’s Boog and Diana have a new mini-album (cf. “American Love Story”) in the pipeline. It was composed for a horror short-movie while this EP is meant as a teaser.

Content: The title song is a terrific piece of visionary electronic-pop music. The sounds are totally industrialized injecting a real raw sound to the work and yet, it remains pretty pop-like and danceable. The familiar sexy vocals by Diana are once more bringing the temperature above the boiling point.

There also is a somewhat funky-minded B-side song plus 4 remixes of “Trust No Bitch”. The remixes are pretty diversified and all attention grabbers. I’m especially into the more sophisticated approach of Venal Flesh and the Kraftwerk-wink of Dekad, but XMH and Restriction 9 did a noticeable job as well.

↑↑↑: This is precisely what I expect from an EP: a great title song, an honest B-side and a couple of great remixes! The industrial pop format of “Trust No Bitch” sounds genius.

↓↓↓: The B-side song “C.S.F.” is not the most representative one, but probably had its place on an EP.

Conclusion: Don’t trust Junksista if you need classical electro-pop music! This band is an alien and an antidote to established standards, which will rapidly contaminate you by the magic quote: “Trust No Bitch”!