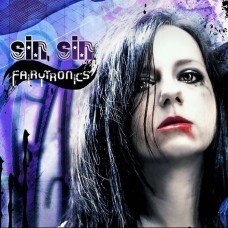 Background/Info: Sin.Sin is a new electro-pop inspired project set up by Kristell who’s the singer of the Belgian goth-pop & rock formation Lovelorn Dolls. She got some help from her Italian label mate Maxx (Helalyn Flowers) who did the production. Notice by the way that the Helalyn Flowers mastermind already did the production of the last Lovelorn Dolls full length album.

Content: While awaiting the debut album of Sin.Sin we get this EP as an appetizer revealing 2 songs plus 4 more songs featuring alternative versions and remixes.

I especially like the song “These Pretty Things” which mixes the sweet and alluring vocals of Kristell together with a kind of reverie-pop music. There’s a kind of enlightening feeling running through the song, which fits to the fairy inspired theme of Sin.Sin. We next get a kind of B-side cut, which is mainly characterized by a somewhat Japanese-like tune.

I’m not as excited about the mixes and remixes. I like the delicate piano version of “Moving Sands” while the more into dance-tune driven “Cosmic Battlefield Mix” of “Lost In Lies” sounds a bit cheap although revealing cool, spooky and dark passages.

↑↑↑: Kristell has the right timbre of voice to experiment with electro-pop music while Maxx of Helalyn Flowers is the right man at the right place. The song “These Pretty Things” reveals an interesting potential.

↓↓↓: I’m not entirely convinced by the remixes and mixes, which are not exactly adding a bonus to this EP. I got a similar feeling at the last EP of Lovelorn Dolls (cf. “Happy Valentine”).

Conclusion: Despite of some disappointing (re)mixes “Fairytronics” reveal a few interesting ideas and I’m really wondering how the debut album will sound like.