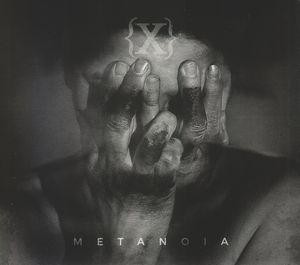 Content: The 6th full length by IAMX already got a very hot response from the fans during their tour all over Europe. Chris Corner and his gang are back and I can assure you “Metanoia” will give you a hard kick in the face!

The title of the album is taken from the Greek, which means ‘changing one’s mind’. I always have experienced the lyrics of IAMX as quite tortured although revealing a funny side as well. Musically this band added something new to pop music, mixing multiple elements with each other while the particular and somewhat androgenic timbre of voice of Chris Corner always appeared one of their strongest elements. And if you know the charisma of the man on stage and the global show potential of IAMX you for sure will agree that IAMX is something special and absolutely on top!

I was more than convinced by their early albums (cf. “Kiss + Swallow”, and “The Alternative”), but the next releases were a little less under the expectations. “Metanoia” definitely sounds like IAMX is back at their highest level.

The songs sound a bit more electronic than the previous releases, but the main strength is all about the global production process. Chris Corner has never been this close to ‘perfection’ in the way his vocals have been produced. He’s literally playing with his vocals, injecting a true spirit to the work. His androgenic timbre of voice remains an essential element of the work, but he also excels in high passages, which can possibly give you goosebumps. IAMX still sounds deeply melancholic and pretty sexy at the same time. There’s a great twist of emotions, which are reaching a climax when carried by elevating music passages.

There’s no better way than taking off with “No Maker Made Me”. This a great opener crafted by excellent electro treatments and carried by a broken cadence. The female backing vocals add an extra sexy touch to the song. The next few songs reveal a fresh pop composition mixed with cold sequences and pure passion.

“North Star” is a noticeable song, but we reach a total climax on “The Background Noise”. This song sounds like IAMX at their best and moving back to some of their greatest debut hits. The songs mixes danceable vibes and pure reverie. It’s a transcendental experience, which is somewhat renewed at the upcoming song “Insomnia”. This subject remains a very inspiriting theme for musicians. It’s a beautiful song that evolves quite progressively into deep electro blasts and melancholic piano passages.

A quite interesting element about this album is that both singles “Happiness” and “Oh Cruel Darkness Embrace Me” aren’t exactly what I should consider as my favorites. It simply confirms the huge potential of this album, which still features a few more surprises.

“Aphrodisiac” is pure lust for the ears and especially the song revealing the greatest sound manipulations. The structure progressively evolves into a total dance climax.

Conclusion: “Metanoia” is a diverse opus, but most importantly one of their most accomplished and strongest albums in years.