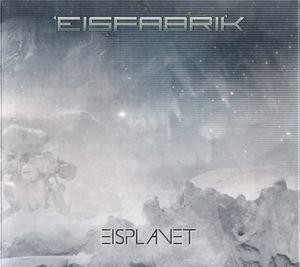 Content: Eisfabrik is a new band active in the scene. The German formation has been set up by Dr. Schnee, Frost and Celsius. The nicknames of the members, and the name of the band and the title of their work clearly refer to extreme coldness like frost, ice and snow.

The pictures I’ve seen reveal a rather identical image reminding me of some passages of “Game Of Thrones”. So I expected a rather cold and icy sound, but instead I discovered a future-pop influenced composition. Eisfabrik already received a real enthusiastic response in their homeland, which I think is totally understandable.

The opening (title-) song reveals elements of dark-electronics joined by the melodic and danceable side of future-pop music with clear and captivating German vocals on top. The song perfectly illustrates both main ingredients and influences of this band. I was especially fascinated by the dark-electronic arrangements, which remind me of the genius of Gerrit Thomas (Funker Vogt). You’ll hear it on most of the songs, but at the other hand there also is a well-crafted and efficient future-pop input, which might remind to VNV Nation for its melancholia and its efficiency.

Eisfabrik doesn’t really deal with new ideas, but the originality is the way they’ve merged those influences together. It creates a new kind of future-pop dimension, which is more ‘muscled’ through the dark-electro elements. “Eisplanet” also reveals a succession of great songs and I can assure you there’s nothing to throw away. Eisfabrik apparently knows the secret formula to compose brilliant songs while alternating German and English vocals. This band also seems to have a passion to create and manipulate sounds injecting an extra sound DNA to their work.

There clearly is a kind of symbiosis between melodic and carrying choruses on one side and manipulated, icy sound treatments on the other side. I noticed multiple potential hits on this album, but my preference goes to I Don’t Miss It”, which sounds like the ultimate song of progressive future-pop music. “Walking Towards The Sun” and “Far Away” both are noticeable songs as well.

The extra disc is an EP called “Maschinen”. This is one more great song, which doesn’t appear on the album. It again sounds in the line of the other songs mixing dark-electronics à la Funker Vogt together with future-pop and body-pop elements reminding me of bands like VNV Nation, And One ao. I don’t want to make too many comparisons as Eisfabrik clearly created their very own style.

We get numerous remixes at this EP by great artists like [:SITD:] , Rob Dust, BhamBhamHara, Mono Inc and even T.O.Y.
There also is a kind of exclusive B-side song called “Polar Mission” revealing a softer and definitely more explicit pop side of the band. And here again Eisfabrik reveals to be a real talented formation accentuating the moody and melancholic side while holding on danceable vibes.

Conclusion: Eisfabrik is one of the hottest revelations on planet electro-underground! This is a true masterpiece!