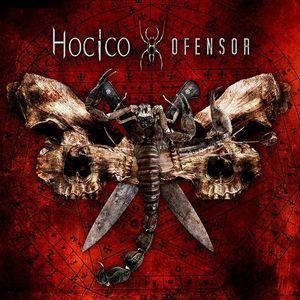 Content: No doubt about it, the new album by Hocico is one of the major releases in dark-electro land for the end of 2015. The Mexican duo is a long-time leading formation in the scene and it always is something really special when they unleash a new album. Hocico has never really invented their sound, but I have to say that the earlier this year released EP “In The Name Of Violence” was in my eyes one of their best songs in years.

I expected pure sonic violence, but “Ofensor” takes off a rather soft, but haunting way. The kind of epic-minded intro cut “Déjà-Vu Siniestro” is a great opener, which I perfectly imagine to start a show as well. “Relentless” is the real take off, but here again it all remains more into haunting atmospheres instead of a sonic explosion. The sound of Hocico remains extremely dark and I would even dare to say ‘deranged’. The haunting electronic atmospheres are clearly reflecting one of the most sinister and obscure visions in life. It’s not the kind of music you listen to during a state of chronic depression.

Hocico often mixed this kind of obscure sound atmospheres with power and danceable electro vibes. That’s precisely what “Sex Sick” stands for. This song for sure is a new potential hit featuring all the typical Hocico sound ingredients with the unavoidable enraged and distorted vocals of Erk Aicrag on top. This band is possessed by a real evil and resistant sonic devil, which is terrorizing the dark-electro community for years now. I don’t know if there’s one darker band than Hocico, but they definitely confirm their status as a disturbing formation with “Ofensor”.

The work didn’t become as violent as the EP “In The Name Of Violence” revealed although the second part of the CD is really hard and evil-minded. “Mind Circus” is another potential hit, which is driven by a great melody line and the familiar tormented atmospheres and hopping sequences. “Auf Der Flucht” is one more terrific piece where Erk is alternating German and English vocals.

“In The Name Of Violence” remains a brilliant piece of dance terror while the final cut “Muerte En Reversa” sounds like an obscure outro.

The limited edition featuring an extra disc (cf. “Invasor”) of 11 remixes contains a nice cocktail of remixes. Hocico has chosen a rather eclectic selection of bands and that’s rather exciting so you can discover the songs in a real different style. You of course will recognize the original versions, but with this extra and personal touch of each remixer. I also like the fact most of the remixes are not coming from famous bands so it’s a way to discover some new and less familiar bands like Salem Witch Switch, Jak Syn, Powerotik, Twisted Destiny, Unzyme and Orbitales. Other formations like Heimataerde, Stahlnebel & Black Selket, Ost+Front and H.exe are more familiar names.

The most surprising remix probably is the pure techno-driven one of “Mind Circus” by Darkstaar Vs. AJ. In my opinion, I have preference for the excellent job of Heimataerde with the remix of “Black Opium” (which is a song originally released at another limited edition of “Ofensor” with an extra EP called “Agresor”). Two more great remixes are “Sex Sick” remixed by Twisted Destin and “Ofensor” remixed by Powerotik.

Conclusion: Hocico remains faithful to their successful sound formula. There’s no space for innovation except for a few surprising remixes on the bonus disc. If evil should not exist, it would be invented by Hocico!