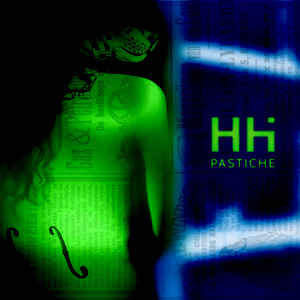 Background/Info: They call their music ‘intellectro’ and definitely remain one of the most atypical bands from the underground scene. Hedera Helix is a somewhat forgotten Belgian band, unleashing their first new album in 13 years! “Pastiche” has been released on the very own label of Hybryds. The band has been characterized by their unique theatre-like live shows and the use of Dutch vocals.

Content: Hedera Helix remains faithful to their anarchistic sound approach, which mixes different influences. It often sounds pretty abstract-like and you can really feel the music totally fits with what they call ‘anarchistic theatre’. Other songs are carried by solid EBM sequences while refined with classical instruments like violin and clarinet. Hedera Helix mixes the extremes, which are often symbolized by electronics at one side and guitar plus classical instruments at the other.

The vocals have been nearly all sung in their Mother tongue (Dutch), which remains a weird experience for non-Flemish music lovers. I don’t know if it creates some frivolity, but it probably sounds as particular as when a Belgian is listening to a Russian or Finnish singing band. The vocals are another element, which makes me think of theatre and other kinds of live performances. The band reminds me now and then of Schwarzblut, but with a less distinguished sound.

+ + + : Hedera Helix is a band like no other. They use familiar influences to create a very own sound DNA, which is impossible to define. “Pastiche” becomes a real sonic patchwork featuring great electronic treatments and surprising vocal parts. The songs have been accomplished with delicate treatments and an artistic touch, which  emerges from some clarinet parts.

– – – : Despite of their original approach it is not exactly the most accessible sound. The main point that hurts is maybe the use of the Dutch language and especially because of the lyrical content, which clearly sounds important (although sometimes totally weird), but here again less accessible to many people.

Conclusion: Hedera Helix is a real efficient vaccine to sonic clones and other artists without their own approach. “Pastiche is the only cure to fashion trends and a warning to remind musicians that music has to be an expression from their own instead of copying their idols.