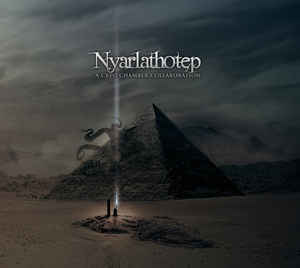 In 2014 Cryo Chamber got some of the most prominent dark ambient artists together to synchronize their studios during a year of collaboration creating the album “Cthulhu” in tribute to H.P. Lovecraft. It was followed up by the “Azathoth” collaboration album in 2015.

Following “Cthulhu and Azathoth”, Cryo Chamber now announces “Nyarlathotep”. This time 25 artists (!!!) synchronized their studios to create this tribute to H.P. Lovecraft. The album comes as a 3CD set and will soon be available for ordering via Cryo Chamber’s Bandcamp page.

The album will be officially out September 27, 2016. And to wet the appetite (and we’re pretty sure that serious dark ambient fans will be craving for this release) here’s already the list of bands which collaborated on the upcoming release: