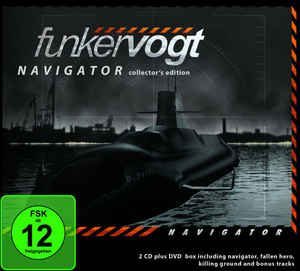 Background/Info: There has been a lot of commotion since Jens Kästel left Funker Vogt. By the end of 2016 the band announced that Chris L. from Agonoize had joined in to become the new singer. While awaiting new work of this leading formation Repo Records released an impressive “Collector’s Item” of the “Navigator”-album. This opus was originally released in 2005 on Synthetic Symphony. Next to the original album this work also features bonus tracks, a bonus CD featuring the EP’s “Fallen Hero” and “Killing Ground”, rare and unreleased songs. Last, but not least there also is a DVD featuring Funker Vogt live in Montreal (Canada) at the famous “Kinetik”-festival of 2008 plus a few clips.

Content: This is an opportunity to rediscover Funker Vogt at its best. The powerful electronics mixing EBM and carrying, dark melody lines plus a constant dance tempo made the fame of Gerrit Thomas and his main formation. This is also an opportunity to rediscover some of the band’s most famous and legendary hits originally featured on “Navigator”. Jens Kästel’s unique enraged and commanding way of singing was another essential element of the German combo. “Navigator” mixes power, rage and melody lines. Both bonus songs were originally featured on the limited edition of “Navigator”.

The 2nd disc brings us back to the aforementioned EP’s and especially to one of the band’s greatest hits in history “Navigator”. You’ll also (re)discover remixes by The Birthday Massacre and Underwater Pilots. The rare and unreleased songs are mainly taken from mixes they made for the German magazines Sonic Seducer and Zillo.

Last, but not least the DVD reveals 13 songs from the “Kinetik Festival” of 2008, which of course was the same period of the “Navigator”-album. Except that the songs from this concert were filmed and recorded in Montreal, the fans will recognize the same show, which was featured on the DVD “Warzone K17 –
Live In Berlin”. You also will (re)discover the clip of “Fallen Hero” and the ‘making of’.

+ + + : This is the right collector’s item, but maybe also an opportunity to rediscover EP’s you didn’t know and Funker Vogt on stage. The extracts from the live show in Canada is the real bonus of this release. Soundwise, “Navigator” confirms that the sound of this band is timeless and especially featuring the very own sound DNA created by Gerrit Thomas. There’s a perfect harmony between the power of bass lines and the hard kicks at one side and the melodic leads at the other. Jens Kästel did the rest and was a great live performer.

– – – : You really have to like Funker Vogt to endure this collector’s item. I maybe expected a bit rarer and especially unreleased material.