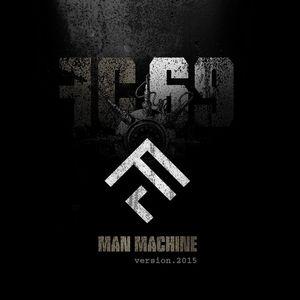 Background/Info: Full Contact 69 is a German duo operating from Erfurt. After having self-released 2 albums they got signed to Razgrom Music, which will release their newest work. As the title of this album reveals, we here get a ‘2015’-version of their debut-album “Man Machine”, which was released in 2012. The CD features the original track list plus both songs from the digital edition.

Content: Razgrom Music is right on target to sign such a talented formation, which deals with a complex format of EBM. It all remains pretty body-music minded and will rapidly remind you of bands like early In Strict Confidence and especially Frontline Assembly.

There’s a similar intelligence in the global production and dark atmospheres. It’s a sophisticated production revealing fine, little bleeps and an exciting progression in the songwriting. The progression is sometimes ending in a delicious climax. There’s a constant power running through the songs while every cut catches the attention of the listener.

The vocals are pretty cavernous, but never saturated with harsh, distorted effects. It all matches with the global atmosphere of the album.

+ + + : I like the multiple sonic effects running though the work while the ingenious 90s minded influence sound pretty fresh and powerful. This is an intelligent electronic format mixing blasting sounds and dark ambiances.

Conclusion: This re-edition of “Man Machine” will be for sure a way to discover a band with a huge potential. I’m really wondering how they new album will sound-like.