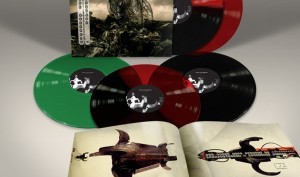 Front Line Assembly entered the new millennium with “Epitaph”, a 10-track album which was actually pretty well received by Side-Line back then. Artoffact Records will now release a fully authorised vinyl version of “Epitaph”.

The 2LP edition will come in a gatefold sleeve and also include a vinyl-sized booklet showcasing the Dave McKean artwork. Also included will be the bonus track “Providence” from the “Everything Must Perish” single, which features Jenifer McLaren (Delerium) on vocals.

The set comes in a special edition black and clear-red half-and-half vinyl (100 copies),

a translucent green vinyl version (150 copies) and a black vinyl version. You can see + order all the versions right here.