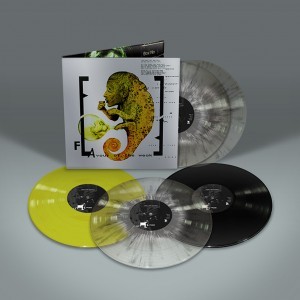 Front Line Assembly followed-up “Hard Wired” in 1997 with “FLAvour of the Weak”, a sample-laden record that spawned two singles and remixes from the likes of Tim Schuldt and Eat Static. The album was a departure from Front Line Assembly’s previous sound, incorporating elements of drum ‘n’ bass, techno, and IDM.

Artoffact Records now reissues a remastered “FLAvour of the Weak”, including 3 bonus tracks taken from the “Colombian Necktie” single. The double vinyl is packaged in a gatefold sleeve, with a special silver metallic ink underlay that accentuates the original Dave McKean art. Pre-orders are taken right now.

100 copies will be made on special ultra-clear base with grey-silver splatters (sold out already), 150 copies on clear yellow (you can buy those here) and there’s also a black vinyl edition (you can buy those here). You can also get all 3 in one go via this link and in that last package you also get the now sold out ultra-clear base vinyl with grey-silver splatters.

Listen to the remastered version of “FLAvour of the Weak”.