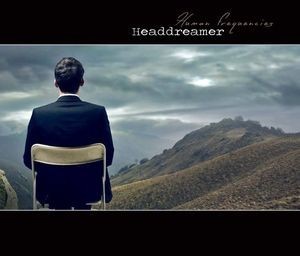 Content: Lord Sauron (Disharmony, Oxyd) is an artist of many talents, which he can express in his different projects. Disharmony for sure became a kind of flag holder while Headdream3r probably is one of his bands deserving more recognition. One of the main reasons why this project remains rather unknown is the digital format of all releases.

This new album seems to be the first one that has been released on CD format as well. We all know that the CD format became a kind of rarity today although I’m convinced it will help new music lovers to discover this formation. “Human Frequencies” also is an album featuring a huge amount of remixes (7), but there also 9 songs on it.

The sound invites the listener to embark on a dreamy sonic adventure revealing crystalline sound treatments, space-like sound waves and mainly down-tempo rhythms. The compositions are carried by delicate sound treatments while globally speaking the arrangements are pretty complex, but fully accessible. It’s pure evasion giving you the impression of watching an imaginary documentary. You now and then will notice some spoken vocals and chants, which inject an extra and somewhat outer-space dimension to the work. The title song is an absolute reference in the genre, but in a different and definitely harder style I hugely recommend “Gaia.”

The remix of “Gaia” by Basementgrrr is a remarkable track as well. Another noticeable song is “Darkland,” which is one of the cuts reminding me of the minimalism of Disharmony. There for sure is a common taste of influences between Disharmony and Headdream3r, but they’ve been worked out a different way.

Among the multiple remixes I also have to mention the delicate and intelligently reworked “Esoteric Sob Rmx” of “Turbulences.” I also noticed outstanding ideas in the remix of “Look At The Mirror” by Lucidstatic.

Conclusion: “Human Frequencies” reveals an interesting harmony between ambient- and even pure cinematographic influences on one side and all the complexity and minimalism of IDM on the other side.