Interview of C-Lekktor + Circuito Cerrado: one of the ‘Endzeit’ leaders in Mexico! 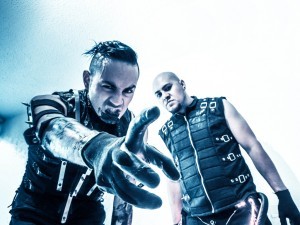 SL: You’ve been featured by both of your projects on “Endzeit Bunkertracks”! You must be a lucky man, but what does this compilation means to you?

Markko: HI,, yeah I’m so lucky and happy and to be honest with you I wanted to take part to this compilation already a time ago. Finally it happened and with 2 of my 3 projects sounds like a dream coming true. I know “Endzeit Bunkertracks” is one of the biggest and most famous compilation series so I’m so excited about all this.

SL: Can you briefly introduce us to your newest project Circuito Cerrado?

Markko: I started Circuito Cerrado now 1 year ago. This project is much more into hard styles such as industrial, hardcore, rhytm-noise and hardstyle genres. I know that I already experimented with these sounds with C-Lekktor, but for some reasons I decided to separate things. I want C-Lekktor now more into EBM & dark-elekktro and Circuito Cerrado for the hard tunes. I always love the club sound in music so you can find it on both of the projects,  but with a different formula.

SL: What do you expect from such a famous compilation series?

Markko: I know this is a well known compilation series so a lot of people will listen to my music and some of them maybe don’t know we exist. It’s always so great to take part on something famous and personally I just want to share my music with all people;  definitely to be on it is one of the highlights of 2015!

SL: What brings 2015 for both of your projects?

Markko: I’m working already on a new album for C-Lekktor, but first there’ll be something very special coming soon! It’s a rather the same for Circuito Cerrado;  the idea is a new EP, but who knows maybe a new album. I also finished the album of my third project Kromak, which is influenced by trance music. I’m just trying to find the best way and moment to released it. We are doing a lot of remixes and are ready for live shows. So in the end a lot of work and music my friend.

Since you’re here … … we have a small favour to ask. More people are reading Side-Line Magazine than ever but advertising revenues across the media are falling fast. And unlike many news organisations, we haven’t put up a paywall – we want to keep our journalism as open as we can. So you can see why we need to ask for your help. Side-Line’s independent journalism takes a lot of time, money and hard work to produce. But we do it because we want to push the artists we like and who are equally fighting to survive. If everyone who reads our reporting, who likes it, helps fund it, our future would be much more secure. For as little as 5 US$, you can support Side-Line Magazine – and it only takes a minute. Thank you. The donations are safely powered by Paypal.
Tags: C-Lekktor, Endzeit