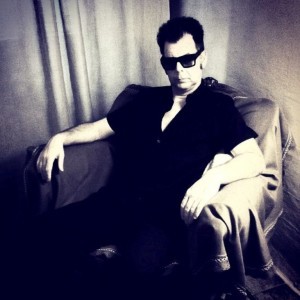 SL: I personally expected a song by Vomito Negro on the new “Endzeit Bunkertracks”, but you took us by surprise with a new song of Gin Devo. Tell us a bit more about the song “Dark Frequencies”?

Gin Devo: Well, at the moment I’m working on “Garden of Evil” this album will be my third solo album,

It’s almost ready, so I thought this is the perfect timing to release some of its tracks on a compilation album, “Dark Frequencies” matched perfect for the “Endzeit Bunkertracks” so here we are, the first song of “Garden of Evil” is out before the album is.

SL: So what kind of album might we expect?

Gin Devo: The work is very different from Vomito Negro, it sounds more digital, but is not made with computer plug ins, it took me a long time to find the right hardware instruments, to compose the right obscure digital sound, “Garden of Evil” sounds very strange, there is no other band who produces this kind of electro material at the moment.

SL: I can’t get away from the idea that Clock DVA must be one of your biggest sources of inspiration! What does this band evoke to you and what made their sound that special?

Gin Devo: Yes, I admire the fantastic Clock DVA album “Buried Dreams” released in 1989, the album has a very intense claustrophobic atmosphere what I like very much, it sounds dirty and digital, when could say that the instruments used on that album sound haunted, So I wanted to work in that direction, and it worked.

SL: You’re still working the ‘good-old’ way using a lot of (vintage) synths and hardware. What do you think about the new generation of artists mainly using software synths/programs?

Gin Devo: Those plug ins have no ‘belly’ they sound very deep and very crispy, I don’t like that. It’s exactly those plug ins that give 90% of the electro bands the same preset sounds, everything sounds the same, it’s cheap, and why they use presets? Because there is no interaction between the artist and a plug in, it’s different when you use hardware synths, there is a machine you can touch and modulate, it has its own character, it’s like you play a computer game or drive a real sportswear on a race track.