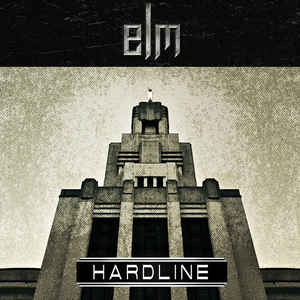 Background/Info: Peter Elm formerly praised as the mastermind behind Restricted Area took us by surprise earlier this year with the furious “Edge”-EP. Elm revealed a pure EBM-approach reminding me of legendary pioneers so I was really wondering what the debut album would sound-like.

Content: “Hardline” is a pure old-school EBM work, which has been clearly inspired by Nitzer Ebb, Pouppée Fabrikk and co. The songs are driven by classical, dry sounding bass lines, powerful rhythms and great vocals by Peter Elm.

The debut tracks are a little less hesitant although you feel that there’s much more power hiding behind “Hardline”. The 2nd part of the album featuring 13 songs evolves towards harder and merciless body fields. The sound formula is quite easy and known by all EBM fanatics yet it remains an exciting experience in sound. Elm can be easily linked to Spetsnaz and NZ, which both probably are the most credible and successful contemporary disciples of Nitzer Ebb.

It also means that “Hardline” guarantees a great and professional production. The global sound is overwhelming and violent; the songs are short and powerful. A few icy leads and extra sequences are fully achieving the work. A last and essential element remains the lyrics, which are sometimes –and just like Restricted Area, sung in French and accompanied by somewhat sterile, but sexy female backing vocals.

The extra disc from the limited edition reveals 4 new songs plus 5 remixes by Elm himself and 2 remixes by Pouppée Fabrikk and Spetsnaz. All I can say is that the extra songs are more than album fillers while Elm made a few great remixes and there also is a noticeable remix by Spetsnaz. Notice by the way that Pontus Stålberg did the mastering of this album.

+ + + : This album stands for a great and merciless EBM production and definitely will bring one new band on the map. Peter Elm is an experienced and talented EBM composer who has accomplished numerous potential hits on one and the same album. The EP title song “Edge” remains a terrific piece in the genre, but I can also mention multiple other tracks. There’s a great harmony between music and vocals.

– – – : Elm appears to be the newest copyist of Nitzer Ebb and co. There’s no originality and no innovation at all.