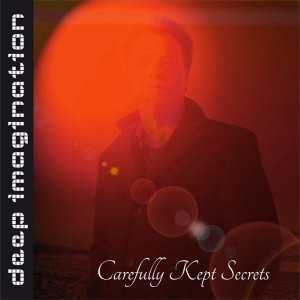 Background/Info: Thorsten Sudler-Mainz is mainly known for his involvement in the Art Of Infinity, but he’s also been involved in the solo-project Deep Imagination since 2005. He already released a few albums and EP’s under this moniker and now strikes back with this single featuring 2 songs.

He invited a few guest artists like a guitarist, a drummer and 3 singers.

Content: The new work has been introduced as more ‘rock’-like, which is due to the guitar adding a rock and somewhat psychedelic effect. The songs remain carried by elevating electronics injecting a soundtrack touch while the female vocals add a heavenly touch to the work.

+ + + : There’s an interesting match between the psychedelic-minded guitar and the dreamy electronics. I also like the different female singers bringing a touch of sensuality, which fits with the slow cadence. Both songs have been meticulously elaborated confirming the writing skills of this German musician.

– – – : “Carefully Kept Secrets” is a single and 2 tracks aren’t that much to be fully satisfied. I would have liked to hear more songs.

Conclusion: Deep Imagination remains an interesting formation, which will mainly appeal to lovers of evasive electronics and cinematographic experiences. It’s not exactly a groundbreaking release although a pleasant listening.