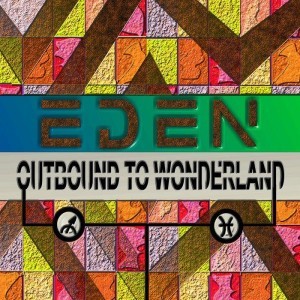 Background/Info: Eden is an Irish duo driven by the creative spirit of Ian Henderson and Mark Power. They established themselves in Germany and had a rather successful career in the dance-scene where they released a few successful albums and did great live shows. “Outbound To Wonderland” is their first full length in five years.

Content: Eden clearly remains faithful to their electro-pop sound, which is quite danceable and carried by happy tunes with some retro influences. Some songs are more into a ballad style while others have this kind of evasive sensation.

The production of the vocals is another essential element of Eden. They have a great singer who sometimes reminds me a bit of Barry Gibb (Bee Gees) when singing ballads.

+ + + : “Outbound To Wonderland” is an entertaining album carried by a few cool songs like the opening song “Don’t Wanna Lose You”, which has been also released as EP-title song. I also have to mention the title track of this album and “A Heart Keeps Beating” plus “New Age”. I have a preference for “New Age”, which is a well-crafted song with a great progression. The somewhat retro style running through a few songs is another great element of the album.

– – – : Despite a few cool songs I didn’t really find an absolute hit on this album. The ballad-style and other softer cuts aren’t exactly the most exciting part of the work.

Conclusion: Eden achieved a mature and honest production, but without absolute highlights. I expected a bit more out of this work.