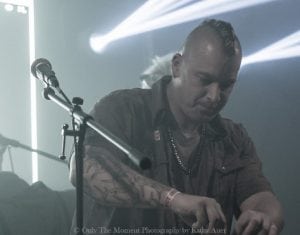 We all know Jan Loamfield from his involvement with X-Fusion and Noisuf-X. But a few years ago now he set up a new project called Stoppenberg. The music is more focalized upon EBM, but with a very own sound approach. Jan Loamfield is according to me one of the most visionary and talented electro-underground musicians from his time. Just like Noisuf-X, Stoppenberg has something ‘different’, call it a very own sound-DNA. The newest album entitled “Ultimate Power” (released on his own label X-Beats) speaks for itself: sonic violence or ultimate power!

Q: The new album “Ultimate Power” sounds as the right description for the sound of Stoppenberg, but what is it all about and what means ‘ultimate power’ to you as musician?

Jan: I´m very focused on sound quality and punch in my tracks -they should really kick ass without the need to work with fast rhythms. My aim with STOPPENBERG is, to keep the BPM lower on most tracks and create the speed and flow with more groovy arrangements and sound design.

Q: How did the writing and production of this new album happened and what have been the new ideas you wanted to exorcise on “Ultimate Power”?

Jan: The main idea was to create a mixture between EDM and EBM -that means clean, but punchy drums combined with heavy, dirty and gritty basslines. I like to combine the feeling of older EBM tracks with a modern sound and production.

Q: I remember you once said Stoppenberg is made of ‘clean’ sounds compared to your other projects. I can imagine it’s another approach in sound production, but how does it really happen and are you using different equipment and/or tricks for this project?

Jan: Yes, like I said, I want to keep the drums clean and undistorted while focalizing more on the basslines, while NOISUF-X is the project that needs these dirty drum sounds and has higher BPM’s in general. It´s not that I use very different equipment, I just use it in a different way. If we talk about the production it´s really the opposite way of working. When I use distorted kick drums for NOISUF-X there´s not much space left for interesting or heavy basslines, because the distorted kicks play at the foreground. The production of a STOPPENBERG track is exactly the opposite, because I mostly use a very clean kick drum to have enough space for complex basslines build from serveral layers and sounds. I don´t know if the listener will notice such a huge difference between the projects, but from the perception as musician it´s something totally different. Sure, if it´s NOISUF-X, X-FUSION or STOPPENBERG  -it´s all written by me, and you can hear my ‘handwriting..’ which means.. you can hear that it´s ME. Some NOISUF-X tracks could sound a bit like STOPPENBERG, and some STOPPENBERG tracks could sound a bit like NOISUF-X. I guess I could even produce hip-hop beats, and you could still hear my ‘handwriting’”, if you are familiar with my music.

Q: Stoppenberg is your EBM project although it still sounds pretty technoid and rave-like. What’s your perception of contemporary EBM?

Jan: To be honest, I’m not familiar with contemporary EBM. I get the impression most of the ‘newer’ EBM sounds like people who want to produce tracks that sound exactly the same as older EBM songs. I guess they want to create the same atmosphere and just want to add new songs to the existing concept.. like bands who try to recreate the mood of the 80th (retro-wave). There’s nothing wrong with that.. but I prefer the concept of mixing it with a more modern style of music and mainly without vocals.

Q: Is there any particular meaning –maybe concept, behind the song titles and the samplings you’re using and would you ever considering to add real vocals on Stoppenberg songs?

Jan: I prefer samples that are somehow war-inspired, just to create a powerful atmosphere that fits to the sound of the basslines which sometimes sound like a rolling tank.

Sure, I´m always open minded -so using guest vocals in STOPPENBERG tracks could happen. One of the first tracks “This Is For Your Body” featured at the first STOPPENBERG-EP has guest vocals and that was a lot of fun.

Q: Stoppenberg productions have been released on your own label X-Beats, which is also a promo agency for other –and mainly less familiar, bands. Tell us a bit more about this concept and do you’ve specific criteria (regarding sound, production, influences…) to promote these bands?

Jan: Yeah, I just noticed that it´s complicated or expensive for bands to promote their music, and I want to help doing promotion with a low-priced solution that reaches a lot of DJs / radio stations. Many DJs are interested to get promo tracks from my own projects (NOISUF-X/STOPPENBERG) and some other renowned bands like C-Lekktor or Mordacious. On the same way they will receive tracks from newer bands they maybe don´t know. And when they download all the tracks, they will also listen and explore bands they don´t know.. I think it´s not a bad concept (lol).