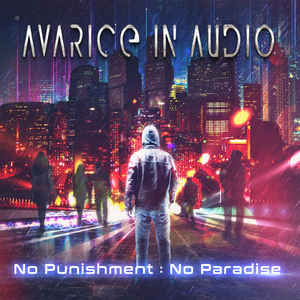 Content: Avarice In Audio never has been a band you can easily compare producing a sound, which remains a bit enigmatic. There’s a dark-electro inspiration coming through the vocals, the kicks and some electronic passages, but there also is something trance and technoid supporting the leads while other passages are featuring a raw and somewhat industrial pop touch. Next to the electronic treatments you’ll notice guitar parts, which are now pretty buzzing and next wafting. Three songs feature other artists; Aesthetic Perfection, Psyclon Nine and Blast Radius. The song with Psyclon Nine reveals a harder and pure doom-metal touch.

+ + + : I’ve always liked artists who are trying to do things different. This album sounds as a sonic hybrid between different influences so in the end you can say it’s ‘dark-electronic’ music although totally different from the established standards. The songs are well-crafted and carried by a high tech production. “No Punishment : No Paradise” is stuff to get dancefloors on fire and especially the second half of the album reveals a few terrific tracks.

– – – : I sometimes get the impression that Avarice In Audio are losing themselves in diversity. From trance-driven leads to pure metal-doom elements featuring Psyclon Nine is not that evident to get a real coherence between the songs.

Conclusion: Avarice In Audio is a sonic chameleon exorcising very diversified music ideas although taken from related music genres. They are alternating potential hits and a few poorly uninspired songs, but globally speaking this work rocks and will make you dance!

Best songs: “Ishtar Will Not Tire”, “Our Cold Hands”.