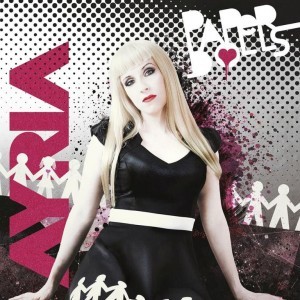 Ayria has just released a new album called “Paper Dolls”. The new work has been again assisted and produced by Seb Komor. “Paper Dolls” is a solid piece of industrial-pop music revealing raw sound treatments and melodic passages, but always driven through the passionate and sensual timbre of voice of Jenn Parkin. Is she a kind of industrial Madonna? Or a cyber Diva? I think she’s just a talented artist driven by artistic passion and maybe a kind of sensitive, female touch getting industrial music more polished and accessible for a wider audience!

Q: The 5th Ayria album “Paper Dolls” is ready to hit the streets, so what does this new opus mean to you and what have been your main sources of inspiration (sound & lyrics)?

Jenn: Release number 5! I feel old now. After the last 2 releases, I’ve said to myself, this might be the last. I’m kind of drained, I’m not sure I have any more inspiration to continue. But that NEVER seems to actually happen.  This time, it was Seb Komor who came at me with some inspirational ideas. We’ve never done it that way before, but it gave me the push to keep going. Lyrical inspiration on this release were: suicide, domestic violence, feminism, isolation, social media. I’d say the sound is a tiny bit softer than the aggressive “Plastic Makes Perfect”. More ballad/melodic explorations.  I don’t know why it happened that way. I just go with it. It’s where I am now.

Q: You already mentioned  Seb Komor who already did the production, but what’s the secret formula behind this chemistry while I think it’s the first Ayria album where his influence (referring to his typical raw sound manipulation) has been that explicit?

Jenn: Oh yeah? Well, him and I have similar musical influences, so we understand each other. He takes my songs and produces them into what I’d envisioned for them. I don’t have to explain too much. He pushes me. He’ll tell me ‘This chorus is good, but I think it lacks something.. Can you do a harmony’ and I’m like ‘hell YES I can do a harmony! Good call!’ I think I push him to do different things than he gets to do too with the structures I write. Plus I push for louder snares all the time!  Our combo just works, and it’s stayed fresh for both of us, so we keep going. I’ve been lucky with collaborators, they’ve all worked out to make great results 🙂

Q: “Paper Dolls” makes me think to a kind of ‘industrial-pop’ production. The typical ‘sweet’ pop influences have been mixed with a kind of ‘naughty’ hard-electro/industrial format, which makes it pretty visionary! What kind of ‘sound’ did you have in mind?

Jenn: I’ve always mixed pop elements and structures with harsher electro! I hear these amazingly cool produced electro or pop songs out there, with gritty synths and hard beats. Then some lame lyrics or melody come in, and ruins it! I want to say something deeper than  the typical ‘Ooooh baby’ lyrics out there. I enjoy harder electro, industrial, dance (whatever the cool genre name of the day is). I like dirty synths and big beats for my sound. If it can be catchy and about something, all the better.

Q: I always have linked Ayria with strong and carrying dance-pop sound, but still with an intriguing and cyber-like image! What does the ‘image’ means to you and in, which way does it reflect who you are?

Jenn: Besides the music, I was originally drawn into this scene/genre and going to the clubs because I loved that people looked dramatic and amazing. The spiky dyed hair, cool looking people, wearing black or neon pink, all accepting each other.  I’ve always worked with clothing designers like Plastik wrap who make interesting stuff that works for stage too. I started with my own 80’s, punky, look and combined it with edgier fashions. My image is just a mix of that, plus it’s always been a bit feminine, since, well, that’s also just me naturally.

Q: You always have been very active at different social media platforms, which I think reinforces the contact and proximity with your fans. How do you see the evolution of the social media as an artist all over the years and what do you expect for the future?

Jenn: I don’t even post as much as I should or want to lately! My normal work and life eat up my time. But when I’m on, I love engaging with fans and friends. I read every comment on my page. The evolution of the social media I’ve used has been weird. I used to have an intimate following of 500 friends back in the Live Journal days, and I could write a ton! (I’m usually very wordy :), next, Facebook where I’m  competing with quizzes, memes and cat pics, and then also twitter where you’re limited to short  sentences. I think the trend has become to post more often, and less meaningful stuff (sometimes) so there’s a lot coming at you all at once. But not to bash it, I wouldn’t be able to do this without that outlet to get news out. I like feeling connected to everyone. It’s now just  part of human culture.

Q: You actually are one of the Alfa-Matrix veterans, but still one of their flag holders! What does it mean to you and especially at a scene, which is mainly dominated by men?

Jenn: I’ve always been treated well with Alfa-Matrix and they release many female artists, which is really cool. Industrial is still very male dominated, and somewhat of a boys club.  But even though the imbalance exists, all the artists and most people I’ve encountered in our genre are very respectful and awesome people. There’s always people that will judge my music differently because I’m a female, it is what it is, sadly.  I hope I can  inspire other women to do what they want musically too. I feel we need to hear the female voices. They have things to create, write and get out there. We need to encourage it.  We’ll get there I hope. It’s just been a bit slow going with the imbalance represented.