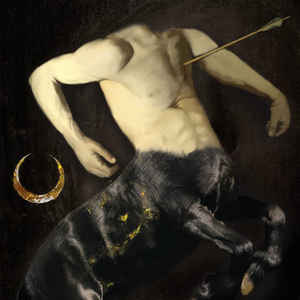 Background/Info: Chiron is a band that will for sure ring a bell for new-wave fans. The band was set up by former Ikon singer  Michael Aliani. He rapidly was joined by Ikon bass player Dino Molinaro. The Australian duo got in touch with two Russian members of the band B2. Chiron released their debut album “Eve” on the Italian label Energeia in 1999 and was mainly active during the early millennium years.

This “Best £Of” brings Chiron back on the map of new-wave & gothic music featuring songs from the “Eve”-album and their 2nd full length “Slipping Away” plus some ‘rarities’ and remixes that have been made of this work.

Content: Chiron is a band I had forgotten a bit, but it remains worthy of examination. They bring the good-old new-wave spirit back alive in style. The sound is filled with a beautiful and graceful melancholia. The songs vaguely evoke The Cure while Aliani’s timbre of voice sometimes reminds me of Nick Cave.

You’ve songs just to listen to and enjoy, but there are also harder cuts carried by great guitar lines. A few electro effects are accomplishing the work while a few cuts are revealing beautiful female backing vocals. .

+ + + : This “Best Of” is an interesting opportunity to (re)discover a band, which maybe deserved more recognition. The guitar is absolutely great switching from powerful outburst to more sensitive passages. The vocals are passionate and simple featuring a talented and somewhat forgotten great singer. The duo vocals are absolutely great while there are multiple noticeable songs on this album.

– – – : The title “Best Of” is only getting back to the early releases of the band so it doesn’t maybe give a complete vision of Chiron’s discography.

Conclusion: Chiron remains a rather underground name from the gothic scene, but they really had a strong potential. Their music was a real passionate exposure of great new-wave music.