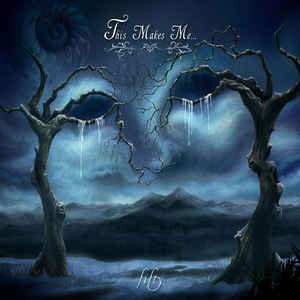 Background/Info: This Makes Me… is not a band, but a kind of conceptual release created by Wave Records owner Alex Twin to celebrate the 50th release of the label. The concept consists of an endless list of artists who contributed together while the profits of the sales will be given away for a charity project helping poor people who need medicine, surgery ao.

Content: It will bring me too far away giving you the entire list of artists who contributed, but you get a real nice cocktail and especially occasionally bands like Chiron together with Auroram, Collection D’Arnell-Andréa and Opera Multi Steel, Cinemascope and Scarlet Leaves, Pitch Yan Of Matter and Bleib Modern, Lost Elegy and Scarlet Leaves, 3 Cold Men and Twilight Ritual, Psyche and Bleib Modern, Haujobb and Data-Bank-A/Dominion.

The result is diverse and absolutely eclectic.

+ + + : The concept is the original and I think the scene really needs more similar ‘occasional’ bands working together for a great goal. I noticed different cool songs and even a few master songs like the dark and mysterious sounding “Departure” from Kriistal Ann and Martin Bowes (Attrition) or “Decent” by Haujobb (on vocals) and Andrew S. Kovats. Another attention grabber is “Falling From Skies” featuring Darrin Huss (Psyche) singing and Bleib Modern. There also is the beautiful song composed by Opera Multi Steel, which will appeal to lovers of heavenly voices.

– – – : I can only, but totally support this kind of great and original concepts. The only thing I would have (maybe) changed is to create a more noticeable cover artwork.

Conclusion: Charity releases are quite common, but the concept of ‘creating’ bands is absolutely genius!

Since you’re here … … we have a small favour to ask. More people are reading Side-Line Magazine than ever but advertising revenues across the media are falling fast. And unlike many news organisations, we haven’t put up a paywall – we want to keep our journalism as open as we can. So you can see why we need to ask for your help. Side-Line’s independent journalism takes a lot of time, money and hard work to produce. But we do it because we want to push the artists we like and who are equally fighting to survive. If everyone who reads our reporting, who likes it, helps fund it, our future would be much more secure. For as little as 5 US$, you can support Side-Line Magazine – and it only takes a minute. Thank you. The donations are safely powered by Paypal.
Tags: Chiron, Haujobb, Psyche, This Makes Me…