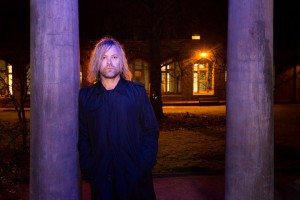 Chiron was set up by ex-Ikon singer Michael Aliani in 1997. The band got completed by by Ikon bass player Dino Molinaro plus members of Russian Rock band B2. This Russian formation became one of Russia’s most successful rock bands of all time. Most releases of Chiron got released around the millennium. Two albums were released during the past year and the album “The Best Of” released on the Brazilian label Wave Records put the band back on the map although they never stopped their activities. Chiron is a real captivating formation, which will appeal for lovers of 80s new-wave music. I’ve been in touch with front man Michael Aliani and this is what he has to say.

Q: Chiron was mainly active during the early millennium years, but you last year stroke back releasing the “We Own The Night”-album plus “The Best Of”-album. Can we speak about the start of a new chapter in the band’s history?

Michael: There is no doubt that releasing “The Best Of” through Wave Records felt like the beginning of a new chapter. It did reinvigorate Chiron. A new vision and clarity of purpose has possessed us through our work.

To those outside Australia it might’ve seemed that we’d dropped off the grid, but we’ve actually been quite busy; more a case of gutting the building for some internal renovation.

We have always been driven to write, record, and perform, but all the other elements of what one would refer to as ‘The Music Sindustry’ have never been a priority or of interest to us. Despite this, we felt compelled to deliver. When you have 10 years of material just sitting there, you need to get it out there. We must honor the work, despite ourselves.

Q: A ‘best of’ album seems to be an appropriated opportunity to look back into the past. So what did you keep in mind and what have been the main facts about Chiron?

Michael: And so it came as a blessing that Alex from Wave Records was keen to release Chiron.  Just having an opportunity to get your art out there is what it is about.

I also realized that Chiron began as a means of working with people I respect and connect with creatively to try and produce something original.

Q: Are there some items you would have done different today?

Michael: No, I would not have done anything differently. I do have to laugh, sometimes looking back on my so called ‘musical career’, it does look more like a scene from the movie “Spinal Tap” than that of a serious artist.

Q: Thinking about the past, I can imagine there’ll be always a link with Ikon. What did this period mean to you and are you still in touch with the other members?

Michael: I actually think that there is more of a link now, that is how it feels anyway. For no specific reason, for a long time, Ikon did not enter my mind.  Perhaps as the years go by we do look back a bit more and reflect. The re-releasing of all the early Ikon material has also played a part. I took the time to listen to those early works and really enjoyed it. Having not listened to Ikon for so long, it was almost like listening to someone else. Quite strange, seeing that it was a huge part of my life for 10 years.

I am in contact with Dino. Always have been. Recently, when I decided that the next Chiron release needed bass Dino got involved. And to be honest I feel a bit silly that I had not utilized Dino sooner. He is a very talented bass player.  Watching him work was pure joy. I just let him go for it, and everything he did added so much to each track.

I am also in contact with Chris. We are catching up for a photo shoot, for another early Ikon release.

Q: A lot of things changed throughout the years and I’m referring to the way artists are composing music today (using software synths), the way people are listening to music (mp3, streaming) or labels closing their doors… How do you experience these changes as an artist?

Michael: It is harder now for musicians who are trying to compose original underground music. But this should not make a difference. If you are doing it to express yourself artistically, then that is all that matters. Art is supposed to be a struggle.

Q: What are you actually working on and what are your further plans and maybe some artistic ‘dreams’ you would like to realize?

Michael: I am in the process of finishing a Chiron album titled, “The Sun Goes Down”. It is Chiron’s darkest, most experimental release. It started as a solo project, but has now gotten a little out of control; an entity of epic proportions.  Realizing a numbers of tracks were in desperate need of some well played bass, I got Dino involved, and so glad I did. For me music is best when others contribute artistically. Working with Dino again has brought me a great deal of joy. A little in awe at how talented a bass player he is. He also played a little cello on a couple of tracks.

And after been totally blown away by Bowie’s  final album “Black Star” decided that my girlfriend should play saxophone on a couple of tracks, even though she has not played for 25 years. She’s 28. And naturally, last week I bought her a clarinet, so we will add some of that too. I am also thinking of releasing “The Sun Goes Down” as a double album with the entire release remixed and reimagined by Robert Anthony.

I am also doing vocals for a  project called The Colour Of Silence from Brazil.  It is dark electronic in style.  It is a new way of working for me. I add vocals to nearly finished versions, then send my vocals back to Brazil where they are mixed. The universe is truly ever expanding. We intend to do an album. He is a brilliant young musician, and so far it is sounding really promising. With a bit of work and some powerful ‘chemistry’, I think we will be able to produce a vitally original album.

And at some stage in the near future, I will begin working on a album with guitarist Carlo Pascale (who has played with Chiron in the past) and Dino. It will be a little more raw.  We have about 10 songs to work on.

And there are some ideas written and in my head that maybe a Chiron release in the future.