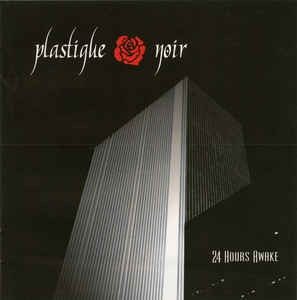 Background/Info: Plastique Noir is a Brazilian trio, which has now been busy for more or less 10 years. The band went through several changes in the line-up and has released their 3rd full length a few months ago.

Content: “24 Hours Awake” could have been entitled “Born In The 80s”! Plastique Noir is a kind of sonic time machine bringing us back in the midst of the 80s. The typical mewing, new-wave guitar playing clearly reveals the main sources of this band. The dark bass lines and global, melancholic spirit only reinforces any possible link with the new-wave years.

The album reminds me of early Cure for its pure dark character and to Lloyd Cole & The Commotions for its more melodic and dark-pop orientation. I also noticed an Aztec Camera touch for the ‘happiest’ part of the work.

Plastique Noir totally fits to the taste of Wave Records, which is mainly devoted to the 80s nostalgia of new-wave music and related genres.

+ + + : “24 Hours Awake” is a pretty honest work that will definitely please new-wave heads. There are a few cool and accomplished songs featured, but I’ve a little preference for the somewhat harder “Rock’N’Roll Is Over”, which features great guitar parts.

– – – : There are several noticeable songs on this new full length, but Plastique Noir clearly brings nothing new to a music genre that has been already emulated and re-emulated. I’m missing a ‘very own touch’!

Conclusion: “24 Hours Awake” sounds like a ‘déjà-vu’ effect; you rapidly got the impression to have already heard this band 100.000 times before. The songs are cool, but I’m afraid we’ll rapidly forget them!

Since you’re here … … we have a small favour to ask. More people are reading Side-Line Magazine than ever but advertising revenues across the media are falling fast. And unlike many news organisations, we haven’t put up a paywall – we want to keep our journalism as open as we can. So you can see why we need to ask for your help. Side-Line’s independent journalism takes a lot of time, money and hard work to produce. But we do it because we want to push the artists we like and who are equally fighting to survive. If everyone who reads our reporting, who likes it, helps fund it, our future would be much more secure. For as little as 5 US$, you can support Side-Line Magazine – and it only takes a minute. Thank you. The donations are safely powered by Paypal.
Tags: Plastique Noir