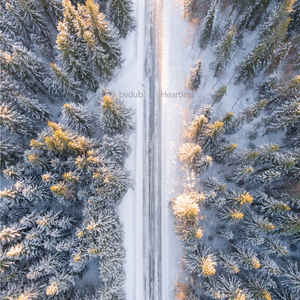 Background/Info: American artist Brock Van Wey has already been active for numerous years now and has released an impressive number of productions under the Bvdub moniker during the past ten years. “Heartless” is his latest opus released during the second half of September.

Content: “Heartless” is a new exploration where ambient music remains the sonic epicenter. Evasive sound waves invite the listener to embrace an imaginary trip throughout unknown spaces. A few vocal parts can be noticed, but it rather sounds as an extra wafting sensation instead of real vocal lines. This album stands for pure reverie accomplished with delicate piano arrangements.

+ + + : Bvdub remains the best antidote for music lovers saturated by dark-ambient music. Bvdub sounds ambient-like, but without the obscure elements although animated by intriguing passages. The titles of the tracks are quite interesting as well and definitely fascinating as a ‘conceptual’ idea behind the music. It’s an elegant and sensitive composition, which moves quite progressively towards an imaginary horizon. The progression has been created with multiple little sonic details, which are easier to catch when using headphones.

– – – : The main point with this kind of album is to discover the music in the right circumstances. You really have to disconnect from other activities and simply take the time listening to this work. But the main and definitely single point I can imagine is that this record rather sounds as part of a wider artistic collective made of music and images. I’m missing these images!

Conclusion: Bvdub once more sounds as music therapy getting the listener into prosperity. This is better than drugs and more efficient than expensive therapies.