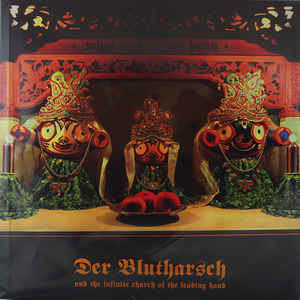 Background/Info: Der Blutharsch And The Infinite Church Of The Leading Hand, which resurrected from Der Blutharsch is a music combo I don’t really need to introduce. Driven by the creative spirit of Albin Julius the band has already released an impressive number of works since 2010. Notice by the way this album got different release formats; next to the CD-version you can get the album on vinyl and cassette format.

Content: This band again deals multiple influences, which in the end makes the sound hard to define. It sounds dark and into bombast arrangements, sometimes reminding me of the mysterious and somewhat ritual style of The Virgin Prunes, but then also more into psychedelic treatments. The vocals of Marthynna remain pretty intriguing and only accentuating the occult side of the sound.

+ + + : “What Makes You P ray” is a kind of sonic enigma and like any other enigmas it has an intriguing aspect. The ritual elements hanging over the work only increase the degree of fascination. The opening cut brings the listener immediately into mystery. Der Blutharsch And The Infinite Church Of The Leading Hand awakens good-old 80s influences from new-wave music, but they also mix it with more familiar industrial and ritual elements. The guitar and vocals both are noticeable elements running through the album. The sonic universe of this album is extremely dark and somewhat disturbing, but in the end that’s precisely what we expect from this band, isn’t it?

– – – : I already mentioned the sound of this work (and this band) is hard to catch. That’s what makes the main strength of the band, but still hard to label. But that’s also an interesting point; do we really have to label all records and all bands?! Definitely not, but then and at the other side it’s often easier for journalists, music lovers and commercial purposes generally speaking. From a pure musical point of view, I can’t say that “What Makes You Pray” is the best work I’ve heard from Album Julius gang although it’s a cool piece of music.

Conclusion: The best way to describe this work is to link it with ‘freestyle’ in dark music inspired by different genres and which will mainly please to lovers of industrial- & ritual music plus apocalyptic rock and new-wave freaks.

Tags: Der Blutharsch And The Infinite Church Of The Leading Hand