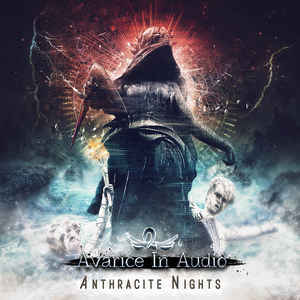 Background/Info: Avarice In Audio is working on their new album, but this EP takes us back to their second opus “Apollo & Dionysus”. They’ve chosen one of the best cuts “Anthracite Nights” and asked some label mates and remix-contest winners to show their remixing skills. One more song from the album was remixed as well while there also is an exclusive cut featured on this EP.

Content: It’s always a good idea to start off with the original version of the title song, which brings us back to the hard techno-industrial-dance style of the Australian band driven by Gerry Hawkins. “Anthracite nights” remains a hard-banging dance-cut with a sharp, dark tune on top and driven by harsh vocals.

The remixes were accomplished by some label mates like Venal Flesh and Junksista while Entrzelle made a remix of “Juvenile Desires”. I noticed a great remix by Venal Flesh and a real intelligent approach, which sounds a bit body-trance orientated by Entrzelle.

Alien:Nation, Antibody and Restriction 9 were selected as remix contest winners and they all did a remarkable job with a special mention for the remix of Restriction 9.

Last, but not least we get an exclusive track (cf. “The Temptation & Expulsion”) to bring this dance-release to a rather prosper and cinematographic music end.

+ + + : “Anthracite Nights” is a damn great piece of music for clubs revealing this electro-modernism, which is typical for Avarice In Audio. There are several cool and even outstanding remixed coming next and I really have to praise the work of Venal Flesh, Restriction 9 and Entrzelle. If you don’t know yet the “Apollo & Dionysus”-album you’ll maybe get seduced.

– – – : This kind of EP is mainly meant for the greatest fans of the band and also for DJ’s who want to make you dance on alternative versions like remixes. Some of the remixes are even better than the original song, which already was a great piece of music.

Conclusion: Except for some great remixes this EP doesn’t bring anything new, but it remains a kind of promo stunt to praise the band and their last album.