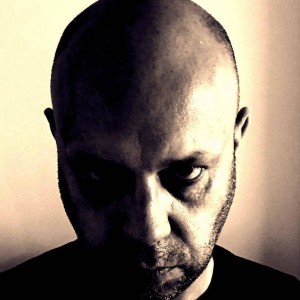 Carl Nilsson started Lucifer’s Aid in Spring 2016. This Swedish musician is also member of the EBM-band The Operating Tracks while he previously got involved in another band called Lithium. The official debut opus “New To Reality” has been released on Progress Productions and reveals a great mix of EBM, dark-electronics and industrial. It’s a fascinating work reminding me to bands like The Klinik and Mentallo & The Fixer with some extra EBM vibes on top.

Q: Lucifer’s Aid has been set up in Spring 2016 and released its official debut album by the end of Summer 2016! How comes it happened that fast?

Carl: From the beginning this wasn’t planned to be a solo project. I wanted to take my music in another direction than before. Get rid of the classic song structures and melodies. The songs I wrote didn’t really fit The Operating Tracks so I thought that they should have to be released under another name.

I wrote the songs, mixed and mastered them all in two months time. I wanted to work with the first impression I got when I sat down in the studio starting writing songs. I didn’t have to compromise with these songs, as you tend to do when you work as a band. So the process was really fast in making decisions about the songs. I had about five songs finished with the same sonic theme so I wanted to make an album with the sound I created.

When the record was finished, I send a copy to Progress Productions and they loved it. Then we decided to release it.

Q: Tell us a bit more about the writing and recording of the album “New To Reality” and what have been the main difficulties you encountered?

Carl: I mostly work with hardware instruments. It’s far more faster and creative for me than clicking with a mouse in front of a computer. I often start out with a drum beat or a bassline and work around that. I can sit for hours and hours with only one bar and fiddeling around with the sounds. With my hardware instruments I get the sounds exactly how I want them and it’s much faster than with a computer.

I work with the first impression and the feeling of the sounds together when I start programming the machines. The sounds themselves gives me inspiration to work with the songs. Next I write the lyrics and come up with vocals during the time I give the tracks a structure. I want that lyrics and vocals are fitting with the music almost as an instrument. That’s why I write them after the song is recorded. There has been no real difficulties. If you know your gear and studio they shouldn’t stand in the way for the creative process.

Q: I noticed a great symbiosis between traditional EBM, dark-electronics and industrial music so what does it say about your influences and the kind of sound you’d in mind?

Carl: I have been listening to EBM and industrial since the mid 80’s so I do have a lot of influences from the bands back then.

When I sit down and write songs I never think of how it should sound in the genre. I never compare the music with the sound of other bands. I want the songs to give certain feeling, how they affect me sonically. And if they do, they should hopefully affect others too. With Lucifer’s Aid I don’t want to over use a lot of sounds. Instead, I narrow it down and try to get the most out of a minimum of tracks. I like the idea of making overwhelming songs with a limited amount of sounds.

Q: What’s up with the other bands you’ve been involved in and what did you try to express with this new EBM project?

Carl: With Lucifer’s Aid I wanted to skip classic song structures and melodies. There are almost no melodies in this music. I don’t have to compromise as you do when working with other people. It is good to find new approaches but with Lucifer’s Aid I am not looking for that. It’s more instant and direct. Hard and straight on. It’s beat oriented music.

Q: The name of your band and the pentagram featured at the rather sober artwork of the album might reveal a fascination for occultism. What is it all about?

Q: I noticed you recently did your very first live performance as Lucifer’s Aid. How did it happen and how do you transpose the sound of the album and as single member on stage?

Carl: Klubb Bodytåget asked me if I wanted to do my ‘premiere’ gig at their club. I thought it was a great idea since it was around the date of the album release.

It’s a new situation for me to be all alone on stage with no instruments and only a microphone. In The Operating Tracks there is me and Carolina standing still behind synthesizers playing notes and singing. With Lucifer’s Aid there is only me and the music. No props, nothing. Only you and the music. So it is kind of different from what I’ve been doing before.

Since you’re here … … we have a small favour to ask. More people are reading Side-Line Magazine than ever but advertising revenues across the media are falling fast. And unlike many news organisations, we haven’t put up a paywall – we want to keep our journalism as open as we can. So you can see why we need to ask for your help. Side-Line’s independent journalism takes a lot of time, money and hard work to produce. But we do it because we want to push the artists we like and who are equally fighting to survive. If everyone who reads our reporting, who likes it, helps fund it, our future would be much more secure. For as little as 5 US$, you can support Side-Line Magazine – and it only takes a minute. Thank you. The donations are safely powered by Paypal.
Tags: EBM, Klinik, Lucifer's Aid