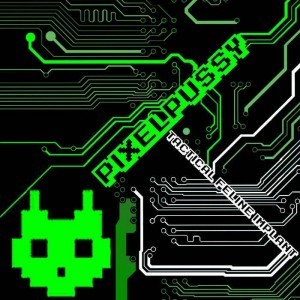 Background/Info: Pixelpussy is back on track and this after a hiatus of four years. Set up by ‘Sir Kitty Meow-Meow’ aka Daemon Chadeau, I discovered this American solo-project by his first two albums released on Moonslave Radio. Pixelpussy, which defines their sound as ‘meower noise’ joined hands with Wicked Wonderland Empire to unleash this third opus revealing 10 new songs plus 3 remixes.

Content: Pixelpussy remains pretty faithful to the ingredients used on both previous albums “This Is Meower Noise” and “Das Mewntz”. This is an old-fashioned minded electro-industrial sound carried by danceable rhythms and distorted sounds. It reminds me of some 90s projects, which were often inspired by the industrial sound of Dive, but with an extra danceable element on top.

The songs are made of repetitive loops and spoken samplings. However the music sounds more sophisticated and elaborate than the average production in the genre. There are several passages revealing manipulated sound treatments like somewhat acid-like filtered sounds and little bleeps.

The final part of the work features remixes by W.A.S.T.E., Satyr Co and Code OOO.

+ + + : Pixelpussy is not reinventing electro-industrial music, but accomplished a noticeable opus that will make you dance on the powerful and somewhat transcendental rhythms. The samplings add some diversity to the work and I especially like the Spanish samplings running through “Mr. Danger”. Another song I want to tip is “Irritable Broadcast Syndrome”, which is more elaborate with great sound handlings.

– – – : I didn’t get a similar surprise as on the debut-album “This Is Meower Noise” although it reminds a cool and well-crafted production. I’m just missing an absolute hit while I also expected a bit more from the remixes. They should have been remixed by Pow[d] er Pussy; this would have been fun!

Conclusion: Be careful and never buy a cat in a sack; it can be a dangerous and merciless kitty especially when it’s called Pixelpussy. This is a fully enjoyable electro-industrial release.