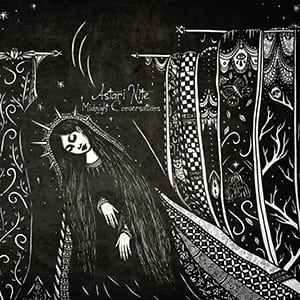 Third full-length album for Mychael Ghost (vocals), Illia Tulloch (drums), Howard Melnick (guitar) and Danny AE (keyboards) from Miami – Florida, including a cover of ‘Til Tuesday (“Voices Carry”). The first 5 tracks were produced and mixed by Tom Shear (Assemblage 23) while the last 4 tracks were earlier released as an EP “Dreams Of Majesty”, mixed by Rees Bridges.

Content: Highlights: first track and previously released single “Sunday Queen” is a worthly opener full of dark atmospheric vibes. The very danceable and melodic “Unfulfilled Promise” could become for sure a dancefloor classic in goth clubs. “I Am Nothing” is built on a nice synth-bass with a very melancholic and bombastic chorus including piano. The uptempo “Rosary Society” is another dancefloor filler in the traditional gothic rock style. On “Divination” Mychael’s voice sounds very good and deep while on “The Girl Who Tried” especially the synth-melodies play an important role.

+ + + : The sweet and warm voice of Mychael Ghost directly reminded me on the voice of Rozz Williams (Christian Death) and also of Sean Brennan (London After Midnight).

– – – : You might get the impression that after a while all songs start to sound a bit the same because of the way Mychael sings.

Best songs: “Sunday Queen”, “Unfulfilled Promise”, “I Am Nothing”, “Rosary Society”, “Divination”, “The Girl Who Tried”.