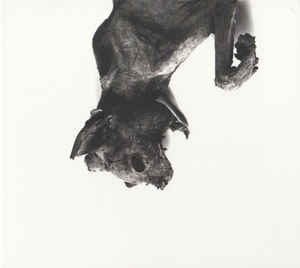 Background/Info: Swedish Master of darkness Henrik Nordvargr Björkk is back on track unleashing a new conceptual release under the Nordvargr moniker. This album is about the ‘transmigration of the soul’. The result is available on different formats: CD, vinyl, cassette and of course at digital platforms. Notice by the way there are some little differences in the tracklist from format to format.

Content: If you know the dark sonic universe created by the Swedish giant, you definitely know what to expect. We’re travelling through an imaginary horror universe characterized by low, dark sound resonations, metallic noises and different kinds of industrial sounds, hard drones and zombie like growls. One of the tracks features guest vocals by Trepaneringsritualen.

+ + + : At first side I would dare to say this is a ‘classical’ Nordvargr release where the listener gets surrounded by an impressive dark sonic web. But this album also reveals an evolution characterized by a move towards the use of more vocal parts. The vocals are more like a kind of extra effect accentuating the state of fear you might experience when listening to this kind of music. But the biggest sensation of stupor remains the music. The menacing drones and heavy industrial sound treatments are absolutely terrific. “Livet Tar Slut” is not only the last cut of the work, but still the ultimate track serving as an apotheosis of fear and torment.

– – – : Nordvargr no longer takes me by surprise. This album has released such an impressive number of works it’s no longer possible to discover real innovation. But it doesn’t mean I’m no longer fascinated; it’s all about the contrary!

Conclusion: When listening to Nordvargr I can’t get away from this orgasmic feeling to hear a genius at work. I can’t affirm “Metempsychosis” is the best work of the artist, but I can assure you it remains a real particular sensation.

Best songs: “Livet Tar Slut”, “Invocation For A Malicious Spirit”, “At The Crossroads Of Immortality”.

Since you’re here … … we have a small favour to ask. More people are reading Side-Line Magazine than ever but advertising revenues across the media are falling fast. And unlike many news organisations, we haven’t put up a paywall – we want to keep our journalism as open as we can. So you can see why we need to ask for your help. Side-Line’s independent journalism takes a lot of time, money and hard work to produce. But we do it because we want to push the artists we like and who are equally fighting to survive. If everyone who reads our reporting, who likes it, helps fund it, our future would be much more secure. For as little as 5 US$, you can support Side-Line Magazine – and it only takes a minute. Thank you. The donations are safely powered by Paypal.
Tags: Nordvargr