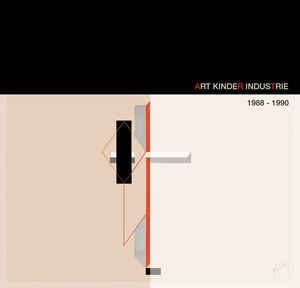 Background/Info: Art Kinder Industrie is a French duo that was active in between the late 80s and early 90s and was driven by Xavier Vincent and David Carretta. That’s for sure interesting for all fans of Carretta, but I also know the original work on cassette format released by this band has been praised for quite a long time now. Art Kinder Industrie was a talented and promising French EBM formation and I think this late CD release is more than an ode. I also noticed that Xavier Vincent passed away in 2006 so this work is also an ode to him.

Content: From the very first track, which is a perfect intro-song you directly will understand why Art Kinder Industrie was a promising band. They mixed good-old 80s EBM with harsher industrial sound treatments creating a raw and unpolished sound. The 14 songs were originally recorded in between 1988 and 1990, but globally speaking they still make sense. You directly recognize the retro-style with some sterile and/or screaming like vocals.

+ + + : This album reflects a piece of history and more specifically the French EBM history. Art Kinder Industrie had the skills to become a recognized formation, but they just entered into history as an obscure French band, which had released some demos, which became highly purchased. So this album is a real relief for all fans and collectors. I was impressed by the efficiency of some tracks even more than 30 years after their original edit. I think that’s also because of the somewhat avant-garde like approach of the duo and it’s not really a coincidence if David Carretta became a worldwide recognized artist after this early period.

– – – : A few tracks clearly sound outdated, but you don’t hear me to complain.

Conclusion: We sometimes have to go back to the roots and that’s precisely what +Closer² has done bringing Art Kinder Industrie to life by this high recommendable album. This is a great work for all 80s EBM addicts!