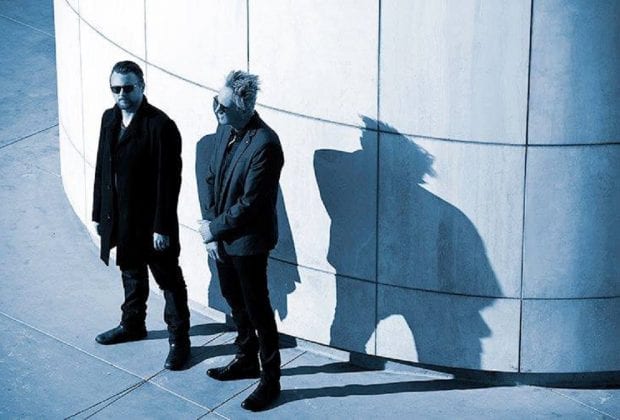 When it comes to EBM, Front Line Assembly weren’t only pioneers, but still a formation that never stopped exploring new sonic paths. For more than 30 years now the Canadian formation driven by Bill Leeb and Rhys Fulber is taking us by surprise. Albums such as “State Of Mind” in the early years and later on “Caustic Grip” and of course” Hard Wired” entered into history. More than 20 albums later Front Line Assembly this year released “Wake Up The Coma” (Metropolis Records), which is for sure one of the most atypical albums in their discography. Robert Görl (DAF), Nick Holmes (Paradise Lost), Chris Connelly (Revolting Cocks, Ministry, Cocksure) and Jimmy Urine (Mindless Self Indulgence) have been featured while it also is the last FLA-work featuring additional programming by Jeremy Inkel. Time for an interview with Rhys Fulber.

“Wake Up The Coma” is released by Metropolis Records and you can order the 2LP vinyl version right here.

Q: I think “Wake Up The Coma” has something special because of the famous ‘guests’ you invited, but also because of Jeremy Inkel who for the very last time did some additional programming on a few songs. What does it all evoke to you and how will you remind Jeremy Inkel?

Rhys: Jeremy had sent Bill some ideas he had, I think ones he had worked on with Jared a couple years ago, so we thought in his honor we should finish them because we know he would have loved that.  We still miss him.  He was a sweet and energetic guy and its very sad he left so soon.

Bill wanted to try some different things on this record and after the Amadeus track with Jimmy came together so well, thought it would be interesting to try a few other guests.

Q: The song “Wake Up The Coma” clearly appears to be a reflection about a ‘certain’ system while it also became the title of the album. Tell us a bit more about it?

Rhys: Yes, it’s pretty much hinting at the future dystopia we are heading towards apathetically. It will take a lot of waking up on humanity’s part, or more specifically the wealthy ones who control everything. However, when brought into that context it may never happen. Also, starting a revolution might cut into binge watching your favorite Netflix series.

Q: You asked Robert Görl to contribute to “Eye On You”, which has been also released as EP title song right before the album. How did this collaboration and the global writing/production of the song happened?

Rhys: This was something Bill set up with Robert. Robert then sent us some analog synth and sequence recordings and I cut them up and added to them to make what you hear now.  Bill later added his vocals in Canada. A global file sharing collaboration, which is the norm now.

Q: The cover version of Falco’s “Rock Me Amadeus” featuring Jimmy Urine is definitely one of the most surprising songs you ever accomplished. Who got the idea of this, what makes it that ‘special’ to FLA and how was it working on the song?

Rhys: Bill had been talking about doing a cover of this for a little while, so we finally got around to it.  The track went through a few different versions before we arrived on the one you hear now. I think it was also his idea to get Jimmy in, who I have worked with a lot in the studio before, because his style would work for the ‘rap’ parts.  I don’t know anyone else who could have pulled this off the way Jimmy did now that I think about it. We recorded his vocal at my studio and I tried my best to get the German close, with my limited grasp of the language. Bill added the low backing vocals in the chorus later. It was actually nice to work on a fun song for FLA, that isn’t too serious for a change.

Q: You also did a clip of “Rock Me Amadeus”, which is pure fun and quite surprising as well. You clearly don’t care about ‘image’ and some of your fans who’re desperately waiting for a new “Hard Wired”. I experienced it as pure ‘artistic freedom’, but what does it really mean to you?

Rhys: This had a lot to do with the director Jason Jensen. We weren’t sure where to take a music video for the song. He proposed something bright and 80s themed so we went with it. I think it’s like a classic ‘music video’ in the old MTV style and we really like it. You can’t always worry about what people will think when you want to try new things, and its liberating to do so. We knew it might confuse a few people, but that was also part of the appeal.

Q: FLA has been set up more than 30 years ago now. I think you accomplished a lot of great things, which make me say you no longer have anything to prove, but what are the focuses and main goals when working on an album and how do you see the future?

Rhys: It’s never really mapped out too much. We just start and see where it leads. Maybe deeper into an album we might go ‘we need another fast one’, but that’s as far as that goes. We just do it and organize the music after. Again, after this long you are never sure. We don’t worry about it too much. Like you said there isn’t much left to prove other than, ‘we can still do this’….