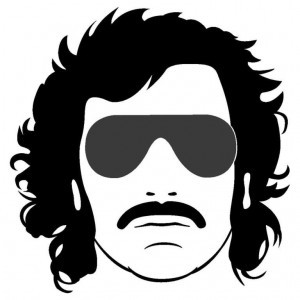 I first heard of David Carretta when discovering the EBM-driven BAND Art Kinder Industrie. I couldn’t believe it was the same musician soon becoming one of the main artists of the electroclash movement. He got signed to International Deejay Gigolo, which was the reference in the genre. Later on he set up his own label Space Factory.

Unknown Pleasures Records joined hands with David Carretta to unleash a retrospective-CD featuring some of his most essential compositions in history; 15 songs of power and dance which can be defined as (inspired by the title from one of his 12”): ‘Marseille Kicks Ass’

Q: Two Decades – A Retrospective” is an opportunity to look back at 20 years of involvement, but what  do you consider as the main facts and maybe songs/releases of your career thus far?

David: The main facts are the moments when you meet people who make you going further through your passion. Nothing can happen when you remain alone.

Q: How do you look back at the ‘electroclash’ movement and its evolution till today? What was it all about and does it still have a sense today?

David: Of course it still makes sense ; musical genres don’t lose their sense from one day till another. It’s as a cycle, they’re moving away and coming back.

Q: I always have been fascinated by your ‘image’, which got numerous and often funny comments and comparisons, but did you really care about it and what’s the importance of the image?

David: Image and music are indissociable. I’ve chosen my own style to bring people something different and make them react.

Q: I’m wondering how you see yourself moving on as musician/producer and label owner of Space Factory?

David: I like to control all things I’m doing and I’m involved in multiple projects, but not only in music.