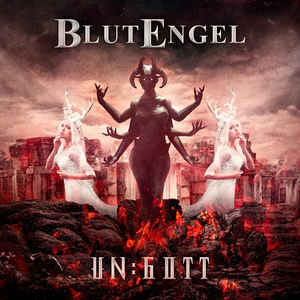 Background/Info: The new Blutengel album comes exactly 20 years after the band’s official debut opus “Child Of Glass”. Blutengel became one of the absolute leading formations from the electro-underground scene and has never stopped releasing referential albums. After the brilliant “Vampire”- and “Surrender To The Darkness”-EPs we now get “Un:Gott” featuring 15 songs on the main disc and 9 remixes on the bonus disc.

Content: Blutengel remains faithful to its dark/wave-pop music mainly characterized by solid melody lines and great choruses, but it’s also an album with empowering guitar parts. The familiar “Vampire” song is one of the best illustrations from this ‘heavier’ and yet melodic approach. “Un:Gott” also appears as one of the Blutengel albums with more English sung songs than ever before. Chris Pohl’s deep timbre of voice excels in charisma while Ulrike Goldmann brings her familiar heavenly and sensual touch to the work.

The bonus disc features remixes by Rave The Reqviem, Any Second, Wort-Ton, Angriffspakt, X-RX, Rabia Sorda, Harmjoy, Battlescream and one remix of the song “Auf Deinen Wegen” (originally featured at the “Vampire”-EP) remixed by Blutengel.

+ + + : Blutengel holds on to  the elements that have made this band become what they are today. It’s a dark and melodic electro/wave-pop format on, which Chris Pohl once more excels in the writing of carrying melody lines. But the essence of a ‘great’ pop song also is the power and magic of a chorus and here again “Un:Gott” confirms great skills. But Blutengel is not a ‘classical’ formation dealing with pop, but a formation with a very specific sound DNA; a band you can’t compare with any other one. And also a band that all over the years has progressively evolved, accentuating some elements of the production such as powerful guitar parts. I also have to say a word about the meaningful lyrical content, which has something deep, metaphoric and psychological. “Vampire” remains an absolute attention grabber –and definitely one of my all time favorite Blutengel songs, but I also have to mention “Into The Void”, “Alles”, “Surrender To The Darkness” and “Morningstar”.

Among the remixes I noticed great contributions by Rave The Reqviem, Angriffspakt and X-RX.

– – – : Remixes always are a nice addition as extra disc, but they don’t really bring a bonus compared to the original versions.

Conclusion: Blutengel has released an impressive number of albums over the past 20 years, but I definitely consider “Un:Gott” as one of the most accomplished and successful ones. A must have!

Since you’re here … … we have a small favour to ask. More people are reading Side-Line Magazine than ever but advertising revenues across the media are falling fast. And unlike many news organisations, we haven’t put up a paywall – we want to keep our journalism as open as we can. So you can see why we need to ask for your help. Side-Line’s independent journalism takes a lot of time, money and hard work to produce. But we do it because we want to push the artists we like and who are equally fighting to survive. If everyone who reads our reporting, who likes it, helps fund it, our future would be much more secure. For as little as 5 US$, you can support Side-Line Magazine – and it only takes a minute. Thank you. The donations are safely powered by Paypal.
Tags: Blutengel, Harmjoy, X-RX