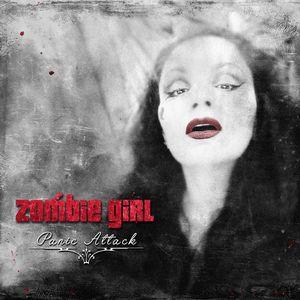 Content: One of the absolute leading bands of Alfa-Matrix is back on track after a hiatus of 6 years. But the real success story of Zombie Girl is even older when singer Renee Cooper and music genius Seb Komor unleashed their EP “Back From The Dead” (2006) and the album “Blood, Brains & Rock’N’Roll” (2007). Cooper left the band when Komor released “The Halloween EP” (2009) and since then nothing has happened.

The latest volume of “Endzeit Bunkertracks” saw the return of Zombie Girl by the song “Panic Attack” remixed by Acylum. A new album is in the pipeline, but Zombie Girl (cf. Renee) is now the single original member at board. This EP features, next to the title song, 5 extra remixes. Nothing really new –as we already got an idea of “Panic Attack” on the aforementioned “Endzeit Bunkertracks”.

The original mix is an honest and danceable piece of music, which is mainly carried by deep sounding sequences and the somewhat whispering and zombie-like timbre of voice of Renee. “Panic Attack” doesn’t sound like a new hit although it’s a perfectly danceable song.
The remixes feature quite diversified artists. My favorite version is the clubby-accentuated remix by Avarice In Audio (definitely one of the hottest new-coming banda on Alfa-Matrix). Another club-friendly remix is the one made by Simon Carter.

The Acylum remix is already a familiar one and transposes the original mix into a darker approach. Cardinal Noire reveals a dark approach as well while the last remix was accomplished by Aesthetische and deals with a more evasive and intelligent electro format.

Conclusion: “Panic Attack” stands for the comeback of this successful band, but we really have to wait for a few more months to realize what Zombie Girl will sound like without Seb Komor. This is the offspring of a new Zombie Girl-era.