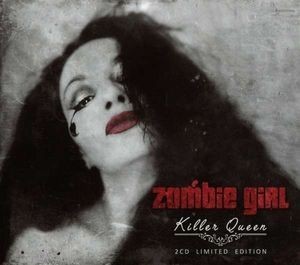 Content: Eight years after the successful debut album “Blood, Brain & Rock’N’Roll” the Canadian Zombie Girl strikes back. We already got a teaser earlier this year by the EP “Panic Attack” revealing vocalist -and now composer, Renee Cooper as the single member on board.

I was really wondering how this new opus would sound-like. Renee Cooper asked Kurt Maas and Dave Rave Ogilvie (Skinny Puppy) to join in for the production and mixing while Lawrie Bayldon (Studio X) took care for the mastering. Cooper has been in a real good company to accomplish this return of Zombie Girl.

Like many electro fans I was deeply impressed by the early releases of this band. There was a perfect balance between Seb Komor’s writing and production skills at one side and Renee Cooper’s talented singing at the other. Replacing Seb Komor is not an easy thing and that’s precisely what rapidly comes through. Komor has this unique and genius touches to create and manipulate sounds. He’s one of the greatest sound architects of his time while Renee Cooper sounds like making her first steps in the writing process. She for sure got the help of experienced producers, but there’s no real comparison between both albums.

“Killer Queen” stands for a new beginning and I would dare to say a new band. The songs are based upon simplistic dark body structures, sometimes with elements of pop on top. The structures are pretty linear and without the terrific filtered sequences of the debut work. The songs are carried by a pumping kick, which is one of the main danceable elements of the work, but I’m afraid that’s not enough.

I’m sorry to say, but Zombie Girl will not ‘make you bleed some more’. It sounds like a zombie, which is no longer blood thirsty and mainly in search of inspiration. A few guitar sounds try to bring some diversity, which appears to be a rather cool idea that would have been explored a bit more.

We also get 2 cover versions, one from Berlin (cf. “Pleasure Victim”) and one from The Cure (cf. “Fascination Street”). The cover version of The Cure is one of the most noticeable tracks for its somewhat retro – 80s feeling on top. But both songs are quite different as well.

We hear for the very first time on this album can hear the beautiful and clear voice of Renee Cooper. She’s a really talented singer and it’s a pity most of the songs have been sung by a kind of spooky, whispering and sometimes childish timbre of voice. Her voice is her main strength so I’m wondering why it hasn’t been produced a bit more that way.

So where’s the common link with the earlier stuff? There still is a kind of funny, conceptual theme around dead and zombies although the global image (and artwork) has considerable evolved as well. While the early stuff was more into blood, punk and provocation, we now get a more styled, but less explicit format.

The best cuts of this disc are some of the remixes at the end. I’m mainly referring to the more elaborated and powerful version of “Rave Of The Dead” remixed by Pre.Emptive Strike 0.1 and a kind of technoid-sounding remix of Dead Inside” by Aesthetische. Hell:Sector did a noticeable job as well, empowering “Killer Queen” with furious guitar riffs.

The 2nd disc featured at the limited edition will bring you 14 remixes by an interesting mix of bands. Bands like Llumen and Eexee bring a minimal touch to this disc while other formations like Psy’Aviah and Avarice In Audio transposed the original songs into a club approach.

The best remixes were accomplished by Helalyn Flowers (featuring vocals by n0emi) injecting great electronic elements and guitar adrenaline into “Killer Queen” while the other great remix is the one of “Thorazine” by Shades Of Hell. This is a pumping version where the lead comes really through a great way.

Another remarkable remix is the one of “Pleasure Games” by Complex Mind. It’s more sophisticated and artistically reworked. This is according to me the most creative song of the work. Two more noticeable remixes are the ones by label mates Diffuzion and Acylum.

Conclusion: This album sounds like a new beginning for Zombie Girl, which in my humble opinion first of all have to elaborate and diversify the global writing of her songs and I here especially expected a bit more from Ogilvie’s input. The limited edition reveals multiple cool remixes.

Since you’re here … … we have a small favour to ask. More people are reading Side-Line Magazine than ever but advertising revenues across the media are falling fast. And unlike many news organisations, we haven’t put up a paywall – we want to keep our journalism as open as we can. So you can see why we need to ask for your help. Side-Line’s independent journalism takes a lot of time, money and hard work to produce. But we do it because we want to push the artists we like and who are equally fighting to survive. If everyone who reads our reporting, who likes it, helps fund it, our future would be much more secure. For as little as 5 US$, you can support Side-Line Magazine – and it only takes a minute. Thank you. The donations are safely powered by Paypal.
Tags: Zombie Girl