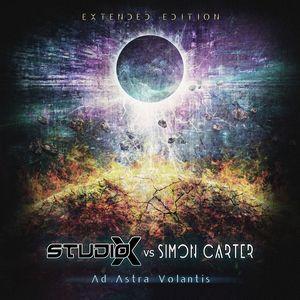 Content: Studio X Vs. Simon Carter is the union between an Australian techno-trance sound genius and a British DJ/artist. I think that this duo is without a shadow of a doubt one of the most controversial projects signed at Alfa Matrix. Their pronounced techno-trance inspiration sounds like miles away from the standard patterns of electro-underground music.

The earlier this year released EP “Dance With Me ‘Dance With The Devil” already gave us an idea about this 2nd studio album and the least I can say is that it sounds like a pure sonic explosion. I really consider this band as one of the hottest and most clubby formations from the entire scene. The sound is not just techno & trance-minded, but is carried by an impressive production work.

Lawrie Masson is a fucking genius. I don’t know if the man needs to take some hallucinogens to find his inspiration, but he has found the sonic elixir to compose smashing and intelligent dance stuff. Some elements reveal a darker and more underground touch, which comes through in a few industrial sound treatments and other EBM passages, but globally speaking “Ad Astra Volantis” is an invitation to embark for a great transcendental sound trip.

The songs are mainly characterized by impressive flat bass lines and breaks leading you to a real climax. If you don’t remember how it feels to get an orgasm, just put this CD in your disc player, play it at maximum volume and I can assure you’ll soon get back into it. This album indeed sounds like pure sex!

There’s an impressive succession of real masterpieces, which are sometimes joined by some sweet pop elements. A few tracks are even reminding me to the sound intelligence of Daft Punk, but transposed into a hard-techno style. The song “Stranger (Dream With Me)” feat. Trix is one of those tracks.

There for sure is diversity at this album. Some tracks are a little bit of a cool down, but always covered with pure dance elements. I also have a little preference for the somewhat robotic-like “Forever Alone Lost And Unknown”, which sounds like ‘nintendo’-electronics.

“More Than This” is another special cut, which evokes some Madonna elements, but once again transposed into a harder technoid production.

A quite important element is the vocals’ production. That’s for sure what makes the difference with usual techno standards, which are not familiar with vocals. The vocals have been used as a kind of effect on top of the music and, which are perfectly matching with the hard sound.

“Ad Astra Volantis” will especially appeal for lovers of techno music and hard-trance, but open-minded electro lovers will possibly be convinced as well. Notice by the way that the album features 16 songs while the digital edition brings you 18 (!!!) extra songs.

Conclusion: This is an album you’re either going to like or not; there’s no way in between! One thing is for sure, you can better avoid listening to Studio X Vs. Simon Carter if you’re allergic for techno-minded productions. I found it simply irresistible and proving that techno music can be intelligent as well.

Best songs: “More Than This”, “The Storm Of Life”, “Shooting At The Stars”, “Lies”, “Dance with Me ‘Dance With The Devil”, “Forever Alone Lost And Unknown”.

Since you’re here … … we have a small favour to ask. More people are reading Side-Line Magazine than ever but advertising revenues across the media are falling fast. And unlike many news organisations, we haven’t put up a paywall – we want to keep our journalism as open as we can. So you can see why we need to ask for your help. Side-Line’s independent journalism takes a lot of time, money and hard work to produce. But we do it because we want to push the artists we like and who are equally fighting to survive. If everyone who reads our reporting, who likes it, helps fund it, our future would be much more secure. For as little as 5 US$, you can support Side-Line Magazine – and it only takes a minute. Thank you. The donations are safely powered by Paypal.
Tags: Studio-X vs. Simon Carter