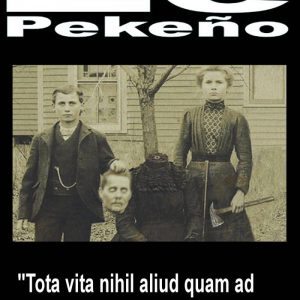 Background/Info: Operating from Barcelona (Spain) Zé Pekeño saw the light of day in 2007. The solo-project is inspired by drone, noise and doom. A few productions have been released, but “Tota Vita Nihil Aliud Quam Ad Mortem Iter Est” is my real introduction to the sound universe of this particular formation.

Content: The front cover shows a decapitated person. A young woman has an axe in her hands while a young man shows the head of the victim. It instantly creates a gruesome ambiance, which comes back in the sound of Zé Pekeño.

The composition is a pure soundscape with a slow progression. Not many sounds have been used, but you’ll notice dark sweeps and other experimental sound manipulation.

The work is filled with droning noises accentuating the obscure sphere running through this opus.

+ + + : The dark and tormented atmosphere hanging over the 3 tracks will ravish dark-ambient lovers. There for sure is a visual appeal emerging from the work, which reaches its apex on “A Fronte Praecipitium, A Tergo Lupi”. The tormented vision of this work has something harmful and perverted, but that’s precisely what we expect from this kind of experiment. This is the kind of record you can fully enjoy by using headphones.

– – – : The minimal and extreme aspect of the work is hardly accessible. I guess it’s not a coincidence if the CD has been limited to 30 copies. The final cut pushes the monotony of the work to its ultimate point and I seriously regret the work has been not a bit more elaborated. I guess this is a production, which needs to be joined by a visual element as well.

Conclusion: The sonic universe of Zé Pekeño is a dangerous path, which only accepts initiated lovers who are already familiar with such kind of evil sound. It’s nothing really new, but definitely a work that will not leave you unaffected.

Since you’re here … … we have a small favour to ask. More people are reading Side-Line Magazine than ever but advertising revenues across the media are falling fast. And unlike many news organisations, we haven’t put up a paywall – we want to keep our journalism as open as we can. So you can see why we need to ask for your help. Side-Line’s independent journalism takes a lot of time, money and hard work to produce. But we do it because we want to push the artists we like and who are equally fighting to survive. If everyone who reads our reporting, who likes it, helps fund it, our future would be much more secure. For as little as 5 US$, you can support Side-Line Magazine – and it only takes a minute. Thank you. The donations are safely powered by Paypal.
Tags: Zé Pekeño