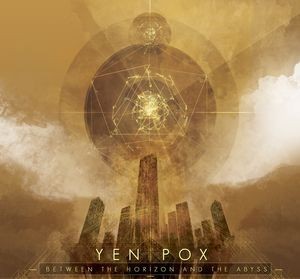 Content: Michael J.V. Hensley and Steven Hall, better known under the Yen Pox moniker, is not exactly what I would call a prolific duo. It even looks a bit like they like to get lost in the endless corridors of time to finally strike back with a new studio album after a lapse of 15 years!

In the meantime they however released a few items like an EP, a compilation album, and an album together with Troum. Twenty years after their official debut album (cf. ”Blood Music”) released by Malignant Records they now strike back with an album revealing 8 new tracks.

The main sources of inspiration remain the darkest corners of ambient music leading the visitor into an apocalyptic sound universe where he’ll encounter obscure sound treatments. Even if Yen Pox are not composing music on regular basis you clearly hear the experience and maturity of both artists. They’re real masters in the creation of a truly horror-like sound universe. It all is composed with a judicious progression bringing their music to an imaginary top of sound obscurity. “The Awakening” sounds like a prophetic opening cut where you directly notice the typical sphere of angst. But I also like the kind of incoming and repetitive sounding train loops.

Both debut tracks are absolutely fascinating, but that’s nothing compared to both genius cuts coming up next. “Cold Summer Skin” and “In Silent Fields” are amazing dark compositions built up with cold sound blasts, humming atmospheres, metallic sound treatments and somewhat mystic and intriguing choirs.

A similar formula can be heard on, “Grief Ritual”, which sounds like pushing torment to a new and dangerous level. But I also enjoyed this cut for its writing and the use of some kind of dark, melodic sound treatments. “Tomorrow In Ruins” is one more cool cut on, which Yen Pox refined their composition with fine bleeps while they hold on their dark and haunting sound formula.

Conclusion: “Between The Horizon And The Abyss” is a fascinating exploration throughout the darkest corners of ambient music.