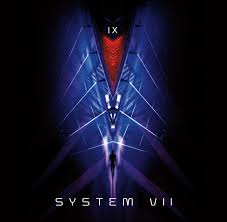 Content: IX is a new formation based in Essex (UK). The name of the band has to be pronounced as ‘icks’, but IX refers the cult sci-fi movie “Dune.” It’s a mysterious planet where there are many new machines.

“System VII” is a conceptual work inspired by Frank Herbert, which only confirms the band’s interest and passion for sci/fi themes. It’s not always that easy to transpose into music, but you rapidly will perceive a cinematographic approach. The opening cuts are a bit hesitant mixing electronics and guitar. I can’t get away from making a link between music and film, but it takes a few tracks before things get more interesting.

“System VII (Part III)” is a great track revealing a rather soft industrial sound mixed with tribal elements. I noticed some cool effects running through this cut while the ritual element makes it all pretty mysterious. This song also seems to be the start of more fascinating cuts. “The Machines (Part I-III)” is a refined electro-ambient track driven by a slow-rhythm and impressive ambient atmospheres. But I also like the progression of this cut, which slowly moves towards a climax featuring incoming hard percussion parts.

The few last tracks are more ‘visual’-like as well reinforcing the soundtrack format of this opus. “Serena’s Lament” is pure soundtrack music while “Division By Zero” is a haunting composition featuring ghost-like voices lost in space and I also enjoyed the kind of tingling noises.

Conclusion: IX clearly deal with a pure conceptual and cinematographic approach based around sci-fi subjects. This debut album reveals a few interesting ideas and I’m really wondering what this band will accomplish on their next work.