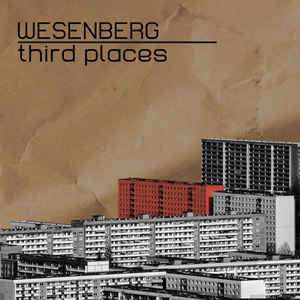 Background/Info: We all know Krischan Jan-Eric Wesenberg as a truly sound wizard involved with bands such as Rotersand and more recently Future Lied To Us and Radioaktivists. But before his involvement with ‘dark’ electronics he was mainly dealing with more danceable and technoid music. He released numerous EP’s as Wesenberg (among other nicknames) and now strikes back with the debut full length of Wesenberg.

The work has something conceptual ‘defining the home as the first and work as the second place, while places of social interaction comprise as third places’.

Content: The concept inspired Wesenberg to achieve a diversified opus, which moves from fragmented, experimental music to IDM to technoid passages and even a kind of lounge parts. The common element between all tracks remains the exceptional sound treatments of this artist.

+ + + : “Third Places” reveals a different side of Krischan Wesenberg; an approach in sound, which sounds miles away from the previously mentioned bands. But he clearly remains a brilliant sound architect, manipulating and creating unique sound treatments. The production is sophisticated, especially the more into IDM-driven cuts (cf. “Everything Nothing”, “Planet”) are the real attention grabbers. The songs are instrumentals, but the diversity of the work makes it all fascinating to explore.

– – – : “Third Places” can’t be compared to the other EBM/future-pop/electro-pop projects of the artist. The music is less accessible or I better should say accessible for another audience.

Conclusion: This work reveals another side of Krischan Jan-Eric Wesenberg, which is perfectly matching with the sound and approach of Audiophob. More than the other bands Wesenberg is involved with, “Third Places” illustrates the composing- and production skills of this great artist.