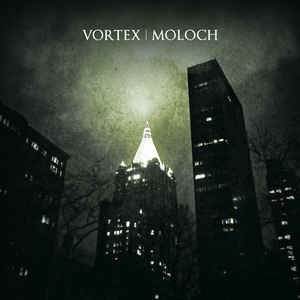 Background/Info: Marcus Stiglegger set up Vortex in 2007. The German artist already released several noticeable releases and found a comfortable home for his work at Cyclic Law. “Moloch” is an interesting piece of work and a sonic transposition from impressions of the musicians when he was visiting New-York in 2013.  He got inspired by the American cinema of the late 70s and visited shooting locations of some legendary films like “Cruising”, “Taxi Driver”, “French Connection” ao. Marcus explains it as ‘I had a lot of strange encounters on the city streets. I continually felt absorbed by this Moloch of a metropolis which made me one of its demons – a hunter with a camera lens. This album and its artwork is the result of this intense and sometimes frightening episode in my life.’

Content: “Moloch” has been introduced as being the most personal work of Vortex thus far. That’s always hard to feel, but I can imagine it’s the opus where he didn’t spare any effort to achieve this composition. It also becomes a quite diversified work, which remains for sure dark-ambient minded, but revealing a different focus from song to song.

It can be now into metal-minded industrial sounds and a few drones and next into an apocalyptic, dark guitar performance. It also explores a kind of ambient-tribal inspiration while another part reveals a great, but sad-resonating piano play evolving into a dense ocean of sound waves and monstrous noise treatments.

The work is filled with multiple little noises and details. It’s a strange voyage throughout a dark and somewhat spooky imaginary city. The dark and psychedelic guitar riffs make me think to a kind of ‘film noir’ impression, which totally fits with the concept of “Moloch”.

+ + + : This is a dark-ambient release revealing different influences, which makes it pretty exciting and especially entertaining. Marcus S got the help of a few guest musicians, which is maybe one of the other explanations for the versatile character of the work. I like the progression running throughout cuts like “Skyline” and “City By The Sea”. “Hunted” is another masterpiece revealing a delicious twist between ambient and some tribal influences. The work is made of amazing sound treatments and some transcendental guitar parts.

– – – : This is not a typical dark-ambient release as it also reveals a few other influences. It sometimes reflects a kind of soundtrack creation, which is a familiar exercise for Vortex. The versatile character of the album is one of the strongest elements of the work, but still an item that might hurt some of the die-hard fans.

Conclusion: This work is an interesting sonic alternative to re-discover New York another way and imagine Frank Sinatra’s ‘city that never sleeps’ as a nihilistic vision of a city sunk into eternal darkness.