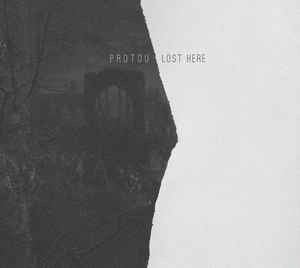 Background/Info: Behind ProtoU is hiding a female artist from Kiev (Ukraine). Sasha Cats grew up with music and is a trained violinist and choir vocalist. She got fascinated by dark-ambient music and set up ProtoU early 2015. She last year together with Dronny Darko released the “Earth Songs”-album on Cryo Chamber.

Content: ProtoU’s official solo debut-work clearly sounds like an experienced artist in the genre. This is an efficient ghost-music production, which is leading the listener to explore the darkest places of his imagination. Filled with numerous field recordings and background drones, the sound atmosphere are filled with an obscure, powerful strength.

But the main characteristic behind this album is the wafting sensation emerging from the songs. It all remains dark and somewhat mysterious-like, but you never get this typical freaky sensation when listening to this genre of music. “Lost here” makes you feel comfortable although alert for what’s coming. Before you really realize what’s going on you are embarked on an astral voyage refined with a few and surprising space-like piano passages. The humming sound waves are there to remind you that this is not a kind of ‘new-age’-trip rather than visiting the ante-chamber of hell.

At the end I can say that this is a sound embraced by evil forces, but which never break through. “Lost Here” is progressively joined by relaxing sound fields, which remain colored by darkness.

+ + + : The main strength of this work is hidden in the imagination from the listener. There are not many dark-ambient releases featuring familiar dark and frightening sound waves mixed with a real relaxing sensation. This opus has been accomplished with subtlelity like revealing an intimate state of mind from the artist.

– – – : I can imagine pure dark-ambient lovers will maybe not find the typical freaky touch on “Lost Here”. It rather sounds like a sound bridge between classical ambient releases and dark-ambient music.

Conclusion: “Lost Here” is mixing different elements of ambient music together, but darkness has been never that enlightening! ProtoU has this little touch of magic transforming music towards a real artistic dimension.